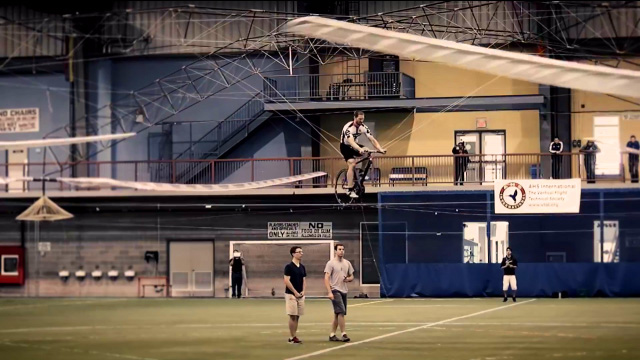 It was great to hear that the Sikorsky challenge has finally been conquered. This challenge was put forward by the Sikorsky Aircraft Corporation way back in 1980 offering half a million smackers to anyone who could create a human only powered craft that would hover stationary in a space of no more than 30 feet x 30 feet for a minimum of 60 seconds at an altitude of at least 10 feet. Anyone who knows something about air flight will tell you that this a huge challenge, pushing the absolute boundaries of what is considered possible.

But, in July a Canadian team (Aerovelo) at the University of Toronto comprised of students, staff, volunteers and professionals claimed the prize with their human powered copter called “Atlas”.

The amount of engineering and trial and error that went into designing and building the ‘copter is daunting. Here are some impressive specs of the machine:

Can you imagine what it takes to spin up a four 33 foot blades and lift yourself plus the 120 pound machine into the air, at the same time controlling the flight in three dimensions? WOW is all I can say!

When you see the entire copter sitting there on the ground, you can really appreciate the engineering that went into making such a huge machine only weighing 120 pounds. The framework is made of composite rods and wire, so it is lightweight and just strong enough for the task at hand. The team went through many design changes over a year as they worked out the limits of the framework, snapping tubes and breaking many support wires along the way.


Everything about this craft is cool! Here is a shot of the transmission system which includes a high RPM fixed gear rear wheel that acts as a dampening system to smooth out the pilot’s pedaling efforts. This makes sense because there is little power at top dead center during a crank revolution that would lead to slowing of the rotors and would probably cause huge oscillations in the frame and massive power loss. This flywheel keeps the power output constant without really storing any energy and that would break the rules of the contest. On the left side of the crank, there is a set of pulleys and guide idlers that transfer power via cable to the rotors. Cable drive is necessary because a chain of that length would weigh too much. Check out the huge chainring; there must be 80 teeth on the beast!


The pilot sits atop a carbon fibre road bike frame that is suspended in the main frame by wires. Craft control is accomplished by rods attached to what used to be the brake levers. I have not seen much detail on the control system, but would I imagine that it works by simply flexing the frame so that the pilot can change the angle of the rotors slightly to fine tune position while in flight. According to the rules, they have to stay within a 30 foot by 30 foot space for one minute.


Every part of the craft is made using the lightest possible materials. This required some seriously detailed work from the team. The picture above is one of the four rotors, a huge spoked wheel made of composite materials and wire for spokes. If you think that lacing a 36 hole bicycle rim is a chore, just imagine making this wheel!

So, a big AtomicZombie congrats to Team Aerovelo for rising to the challenge and pressing forward after many broken frames, snapped wires and crash test flights! A lot more info on Team Aerovelo's Atlas craft can be found on their website here: www.aerovelo.com