"Hi All. Just thought I would put up some photos of the chopper cycle I am working on. Its nearly ready for paint but I was too focussed on building to post till now.

The idea was to build a chop cycle which looks as similar as possible to an old rigid frame Harley and using the atomic zombie plans as a base of course.

I'm not quite finished yet but only have the bobber seat (half finished) and the mudguard and maybe a sissy bar to go before paint. Anyway a picture is worth a thousand words they say so here goes." 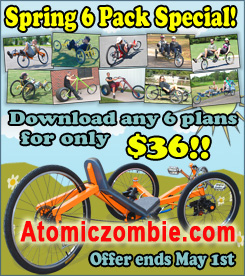 Posted by AtomicZombie at 11:09 AM