Every time I find myself standing at the gas pump, holding down the lever while the dollars spin past, I tell myself that there must be a better way. Let’s face it, the cost of using a gas guzzler adds up to a lot more than just a dent in your wallet each time you fill ’er up, although the pain you feel at the pump is certainly instant. How about all of the effects to the environment?

Using a gas powered vehicle to pick something up from the store a few blocks away is certainly convenient, especially on a cold day when you can just press a button on your car remote starter and let the interior heat up for you. But, with millions of people doing this, what is the net cost on the environment? Call me paranoid, but with the crazy worldwide weather we have been experiencing in recent years, I think the answer is obvious. From this point forward, I will use the word “car” to refer to all gas guzzling ground transportation vehicles.

Environmental issues aside, there are many good personal reasons to be leaving the gas guzzler parked more often. My health has been impacted by the convenience of the car since the first day I passed my road test. How did I get around in the days before becoming enslaved to my car? Well, besides begging for an occasional ride, I got around on foot or by bike!

I remember how simple things were back then. My main concerns were usually how long it would take to get from point A to B and making sure that my tires had air. I had no expensive repairs, no insurance costs, no parking problems, and didn’t have to work overtime just to pay for fuel. Ironically, I had more free time even though it took a lot longer by bike because I didn’t have to schedule in time for exercise because it came with the lifestyle! That extra body weight was a direct result of using a car, too. Sure, the car helps me get around in a hurry, but I end up either wasting more time and money to sweat over a treadmill or consulting with a doctor on how to fix my health.

Seems as though in our later years we have things backwards, don’t you think? “DING!”Oh, hold on a minute, the truck is filled now. I have to go give the attendant another $70 bucks!

I’ve decided to get a grip on my shrinking wallet and ever expanding waistline, and find a practical way to leave the car at home as much as possible. Now, the key word here is “practical”. Living in the a rural area of Northern Ontario means that I will always need a reliable car or truck to move large cargo and to travel large distances to the city in the winter, but since there are some local stores within riding distance a bike could certainly be used for many journeys.

For those who live in the city, a practical human powered vehicle with some cargo capacity could also be used for many local trips, such as grocery runs or social calls. For me, practical also means affordable and robust, which almost always translates to home built, which to us DIY types is great news. Of course, there are commercially available human powered vehicles “velomobiles” for those who can afford them, but since they tend to be as costly as a decent used car, they are out of reach for most. 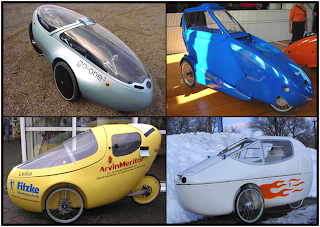 All of these velomobiles pictured above are obvious works of art, but there is no way I would ever part with ten grand for something that I could build myself. Obviously, there will be tradeoffs between cost and aesthetics, but there is no reason why a very practical and sturdy velomobile could not be built using readily available parts by anyone with a few basic tools and a lot of motivation.

In fact, I have seen some home built velos that are streamlined works of art, but often the cost of materials used and the skill set needed are beyond most of use weekend garage hackers, and the end product is more like a hotrod than a bike you would want to take out in traffic or ride around in the rain.

So with all of these goals in mind, the first choice becomes - delta, tadpole or quad?

The type of base vehicle will determine the overall shape of the body as well as its load carrying capabilities, handling characteristics and aerodynamic advantages.  Choosing one of the three configurations was actually quite a chore as they all offered advantages and disadvantages when it came to costs, aesthetics, practicality, and ease of building. In the end, I decided that a delta trike would be the most practical base vehicle, but I will discuss all three possibilities, as well as their strengths and weaknesses. 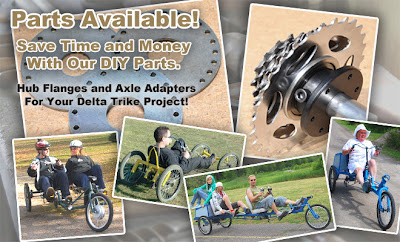 Posted by AtomicZombie at 4:58 PM