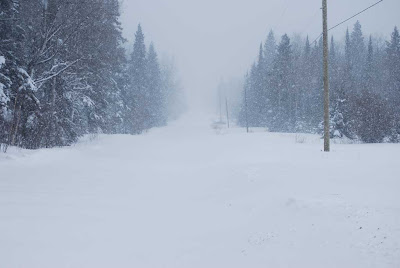 Thanks for all the emails and Facebook messages from so many of you concerned about us. Yes, we are OK. Had a scare early Friday morning when a power surge hammered our breaker panel and we were without power for awhile. We worried that there was damage to our breaker (every one of them was tripped) and there was some sizzling. 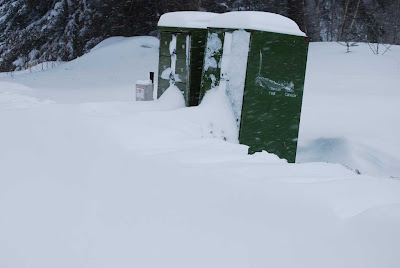 Hydro crews were already down the road working on something and power was restored within a couple of hours. Then the furnace wouldn't blow warm air and our outdoor portable shelter was covered in snow and we had to push it all off by hand around 1 am. The wind was unbelievable.

Our cell phone service went out, then the power was on and off again for part of the day which made our Internet connection non-existent for awhile, and I got stuck up to my waist in snow, while being pounded relentlessly by the wind.

Thank goodness we have a wood stove or it would have been pretty chilly in here. The furnace still isn't working properly. It's been an interesting 36 hours for sure.

We couldn't get out of driveway and our road was completely covered with more than a foot of snow. The plows couldn't keep up with the onslaught of white stuff and wind gusts. Snow drifts are waist deep in some areas of our property.

The snow has finally stopped for now and the sun peaked out around 6 pm, but there's more snow and freezing rain in the forecast and the wind hasn't let up.

So, we won't be sending out any parts orders until late next week, but that will depend on the weather and road conditions. Highways are too treacherous. Thanks for understanding.

There's more snow and freezing rain coming for part of this week, but we should see positive double digits later in the week and weekend, so maybe spring is on the way after all. 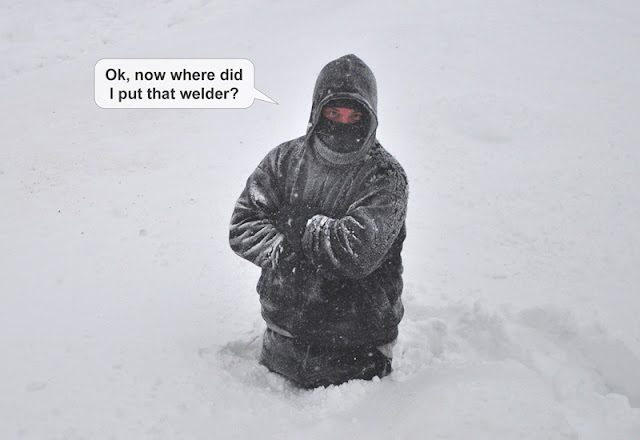 Posted by AtomicZombie at 2:11 PM