Painting under the stars 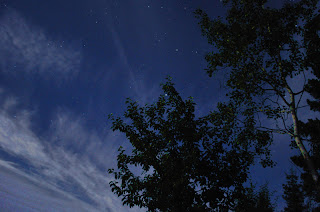 Yesterday I managed to get a full day in on the latest project "the Transporter Cargo Bike". It was a hot one, but now that I have power running down to the old shack, I was able to stay somewhat cool by aiming a huge fan at myself as I welded and grinded away on the almost completed frame. My goal was to complete all of the welding and have the frame painted before the end of the day, but with all of those round tube trusses to weld and the fact that I had not yet figured out the kickstand, I knew it would be a late one tonight.

Since the Transporter was really turning out nicely, I decided to go all the way and add a front disc brake. Actually, this worked out well for the plan because I could now show the steps needed to remove the brake studs from the front fork and install them at the rear and then show how to make a disc brake mount for a front fork that had none. Since most of the stopping power is needed at the front of a bike, the disc option was a good one for a cargo bike that may see loads topping the few hundred pounds mark. 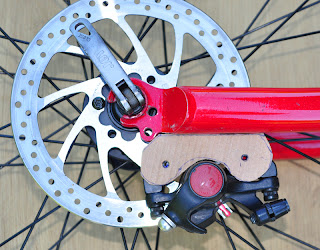 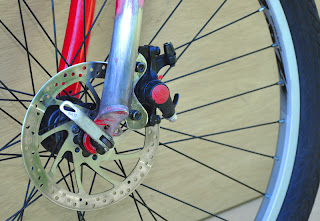 The cardboard template method of making a front disc brake mount went well, and was easy to do thanks to the "weld it in place" method of aligning the brake hardware. I will probably make this into a separate mini tutorial for the main page, since disc brake hardware is becoming very common and inexpensive these days, and is fairly easy to install.

Now, I was faced with how to design the kickstand. A good kickstand is a key feature on a cargo bike; it has to hold the bike stable while the heavy loads are moved on and off the platform. Obviously, a flimsy side kickstand would be pretty useless, so I worked out a stand that would raise the front end slightly off the ground and level the bike on both sides for maximum stability. This type of kickstand is called a “center stand”, and turns the bike into a trike, with three points hitting the ground (two stand legs and the rear wheel). After some testing, the stand proved to work very well and was made out of nothing more than some tubing and bits of flat bar.

When I finally finished all the welding and did a little sanding on the rough spots, the sun was already setting. I decided to paint the bike under the moonlight and brave the mosquitoes that were now coming at me in large waves. 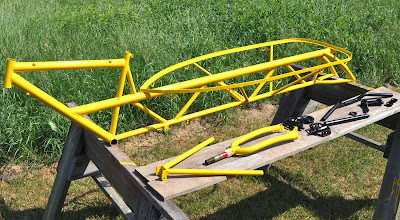 I decided to use brush on paint this time since this bike would be taking a beating and living outdoors mostly. Instead of a perfect paint finish, I opted for a slathered on thick coat that would be easy to retouch as the bike was used like a piece of farm equipment. Under the dim light of the moon, I slopped on the paint as thick as peanut butter, painting the bugs right in as they landed on the tacky paint! I could barely see what I was doing, so I figured the paint job would be less than pretty in the morning, but yellow is somewhat forgiving and the goal was durable paint, not a showroom finish.

Next morning, I took the frame out for inspection, and wadda-ya-now, the yellow paint job wasn't all that bad! There were a few spots needing a bit of retouching and some runs near the joints, but at a distance of 6 feet away, it looked as good as a spray on paint job. I may use brush on paint a lot more in the future since it requires no primer, and costs only $10for a can that would paint 3 bikes.

The only drawback to the department store rust paint is the selection of colors: black, white, grey, red, green, blue, orange and yellow. Knowing that I can make any color imaginable by mixing red green and blue, I have a cunning plan for my next brush paint job - mix 'em and see! By using the color picker in Photoshop to get the RGB values, I "should" be able to concoct a similar color by converting the decimal value to a volumetric mixing value.

Well, that completes the first official plan of 2013, so if the weather holds out today I may get the chance to assemble the Transporter Cargo Bike and show it off in tomorrow's blog entry. I am looking forward to hauling that old freezer out of the bush and then loading a few hundred pounds of firewood onto the cargo bed to make some fun videos of the bike in action. Type y'all tomorrow.

Posted by AtomicZombie at 2:24 PM