"My dad built this from the plans from your "OverKill chopper" build.  Here are some photos, pick and choose any if you would like to use them.

Thanks for your ideas and plans, they are tons of fun and very informative! Thanks, Joshua Stover" 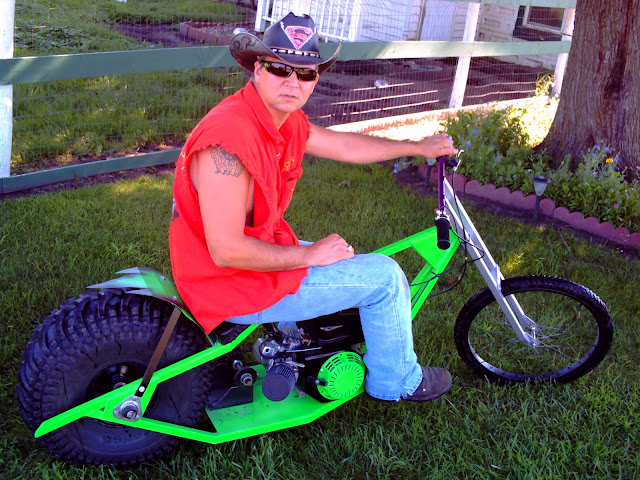 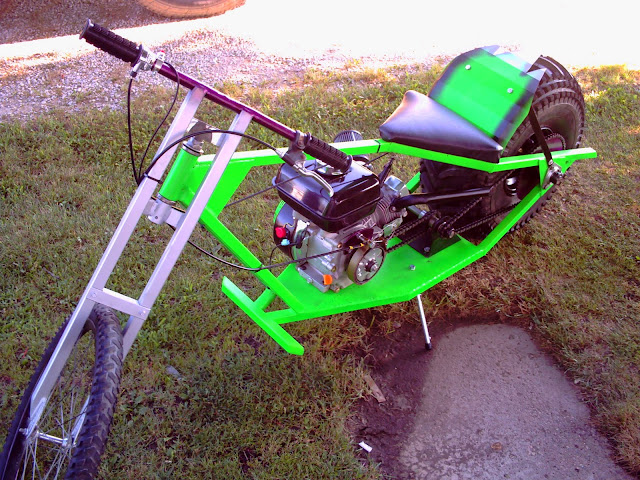 OverKill is appropriately named because everything about it is way over the top. With its ridiculously wide rear wheel, and ultra long forks, what else could it be called other than OverKill? Does a chopper really need a dragster tire on its rear end, or such a high frame? Not really, but does a roadster really need a Hemi? You know where I'm going with this. Actually, the main reason I built OverKill to such outlandish proportions was to retaliate against the mass marketing of big box store choppers.Even though this sick chop has proportions that rival some of the petrol-burning street customs, it certainly won't bust your wallet or require you to spend the next year in a machine shop. The fact is, OverKill is built from nothing more than an old car rim, some scrap bicycle parts, and a few lengths of electrical conduit using only a welder and grinder.

Yes, anyone can pull this one off using the tricks shown in the plan.. Every step of the build is detailed using high resolution photos, and you will be amazed at how simple it is to add bicycle spokes to the car wheel, and there is plenty of room for you to add your own evil modifications to the frame. How does it ride? Dude, look at this beast, it was made for cruising!

All of Atomic Zombie Extreme Machines plans are downloadable PDF format. Multiple discounts, free tutorials, videos, gallery, newsletters, blog and more. All of our plans are delivered as PDF files containing high resolution images and diagrams for optimal viewing and printing.
Posted by AtomicZombie at 12:22 PM