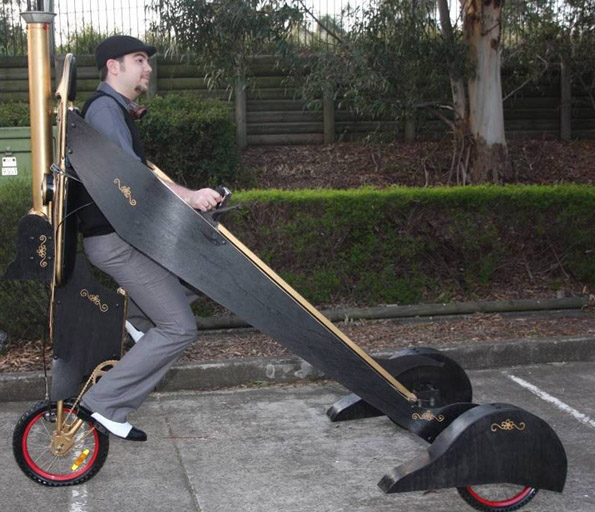 "I've been looking at alternate forms of transport, and because the regulations on things like mopeds and electric vehicles are so ridiculous I decided to focus on pedal power.

Since the instigations of mandatory helmet laws in the early 1990s, here in Australia, people rode their bikes into the garage never to be seen again. But, that is a different story.

It’s about getting people back on a bike. And a strange bike is always a good way to pull attention to bike riding. So, I went about building a strange bike, not just one with a strange shape, but something very different. 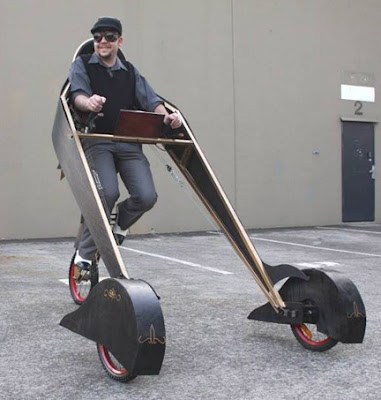 As I am a fan of the "jet pack" science has promised me, but still has not delivered. I thought something that would feel like one would do; this was the main reason for the steering being as it is. The only thing to restrict the design was its cost. I wanted to build something that anyone could built if they put the time into it. I am proud to say, that this bike came to a total price of $103 (excluding the GPS). I am a pretty big Gomi Art style fan (Gomi Japanese for "rubbish"). So, I used bits and pieces I could find, an old bike, a metal folding chair etc.

It started its life of as a child's BMX bike I found. Standing it on its back wheel, looking very unicycle, I had a start.

But, because I barely have the balance for riding a 2 wheeled bike, one was out of the question. I decided to add a few more wheels. Luckily, finding a second donor bike was pretty easy. The steering/wheel hubs where welded together next, as I could not find any hinges large enough to hold the weight. I built some out of some
pipes I had laying around. The steering is quite simple, even though it does not look it. 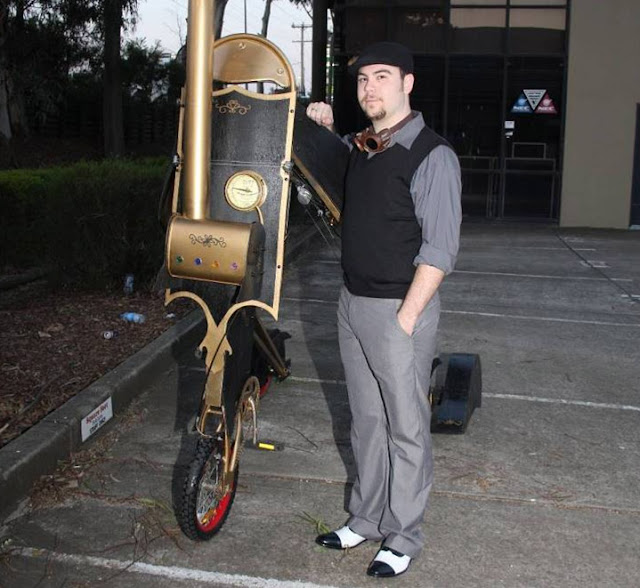 Through a set of pulleys, the cable is pulled one direction or the other. All Steering and braking are done by the right hand control, (The left is kept free for a possible hub motor controller). Once it could steer, it needed to stop, which is done by normal bike brakes. Some longer brake cables had to be sourced, and the brakes had to be repositioned, but all in all not too difficult. At this time, I was asked to show the bike in a Steampunk exhibition, so lots of gold paint and 1900s steam style was added. I would hope that Jonathan Swift or H.G.Wells would be proud.

Once climbing on board has been accomplished (done by facing out, holding onto the handles, putting one foot onto a peddle and stepping back and up) sitting on it is quite comfortable. Though higher than a normal bike, it feels quite nice (safe).

Moving in a forward direction also feels nice, moving left or right is only a slight move of the controller. But, there is always a price to pay.

When turning at speed, it tends to want to flip, well lift one wheel of the ground, which when you think about it is right, but it will scare the bejeezus out of you the first few times. The trick is not to try to fix it and put the wheel down. It will do that when you straighten out, but when you have become accustomed to it, it just adds to the look and fun of the bike. 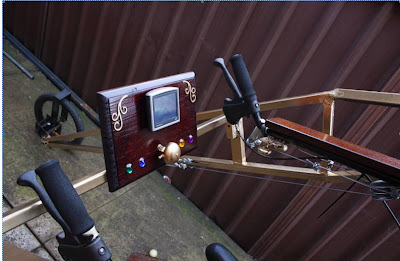 The GPS, The high-tech part of this vintage looking bike, is there more to tell your speed than your location. FYI, I have only taken it to 12 km/hr, fast enough for me. And, as the bike's intention is to be shown to inspire commuters to ride their bikes, speed is of little importance.

I have attached quite a few photos, I hope you find it amusing, and please feel free to ask any question that you may have. Thank you." ~ Tony, Australia

Thanks for sharing your story and pictures, Tony. Very inspiring indeed, and you look very dapper! So inspiring that Brad says he wants to build a steam punk style chopper bike, too!

Posted by AtomicZombie at 4:33 PM