Happy Independence Day to our American community today! Hopefully, those who get some time off today will be out in the workshop making the sparks fly.

Well, you are officially reading the first entry of what will be my daily morning blog. I have decided to start having my morning coffee in front of the computer to put down my thoughts and musings on the day ahead and some of the projects I am working on for the AtomicZombie site. This will be a random scrawling of project ideas, progress reports (inducing successes and failures), general DIY stuff and whatever else comes to mind.  Ok, let's give this blogging thing a try. 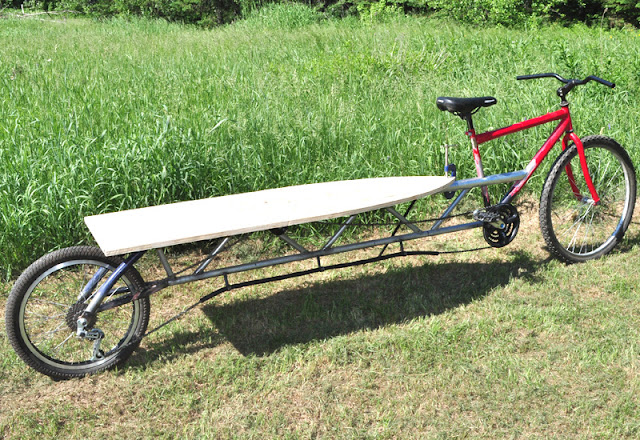 The cargo bike formerly known as "the Pelican"

Often, I start a new project (plan) based on sketches I make and the name of the bike or trike takes on some aspect of the drawing. Last week, I announced the Pelican Cargo Bike, a rear loading upright cargo bike that would have a huge tub-like pouch to drop in cargo. This pouch aspect of the bike made me think of a pelican and its huge scoop-like beak.

But, as usual, things change as a bike comes together and I decided that a flatbed top would allow for carrying larger cargo and become more versatile for carrying large objects of varying size. This, of course, ruined the pelican name, so a new name is now in order.

The large flatbed will be made from a 3/4 inch thick plywood sheet with metal edges made of angle iron. Trussing will be installed along the sides so that the weight will be transferred to the main frame, allowing for a large amount of weight to be carried. Now, this new design is not pelican like in anyway, so I needed a name that fit the new design, which became more like a transport truck.

Hey, how about "the Transporter"? Yeah! That was easy. The name fits the bike and reminds me of those cool movies where Jason Statham plays a freelance driver who finds himself in all kinds of interesting predicaments. So, the cargo bike formerly known as the Pelican shall from this day be known as the Transporter Cargo Bike. Ok, now on to the design.

A made the flatbed support cage out of angle iron using techniques I discovered while making the sides for my ongoing velomobile project over the winter. By cutting notches out of the angle iron, I can bend it into seemingly round shapes and then weld it back together. A few round tubes transfer the load back to the main trussed frame tube and the plywood base will fit right into the angle iron frame to distribute the weight evenly and offer a strong yet light loading bed to carry massive cargo. 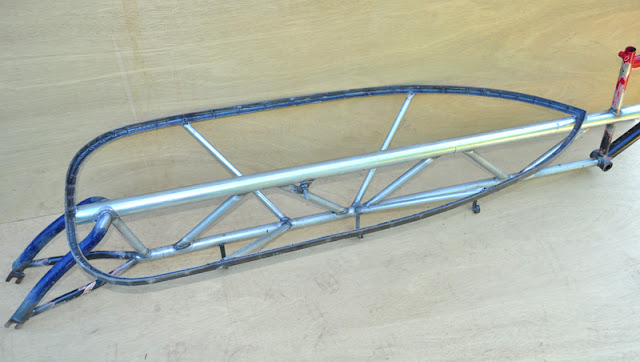 When I announced the cargo bike in the forum, I bragged that it could carry a full size freezer, and I intend to prove this claim. I found an old freezer in the bush and I will try to drag it to the road, load it onto the cargo bed, and then haul it up the dirt road.

Maybe I will even fill the freezer with other junk just to show how much weight I can haul with this new cargo bike. This kind of thing makes for great photos and videos for the site and it's fun to push a new bike to the limits.

I am almost ready to paint the Transporter Cargo Bike, but have not yet figured out the kickstand. What good is a cargo bike that can’t stand up while being loaded?

On the Flying Dutchman front loading cargo bike, I made a center stand from handlebars and that worked very well, so I will probably look at something similar. On this commercial cargo trailer, the center stand pops out like a table leg. This is also a possible solution that I will be looking at today as I finish the bike.

Well, thanks for reading my morning blog. I am off to the shack to complete the bike and hopefully paint it by mid-afternoon. I will report back on my progress tomorrow morning. Talk at ya later!

Posted by AtomicZombie at 12:52 PM