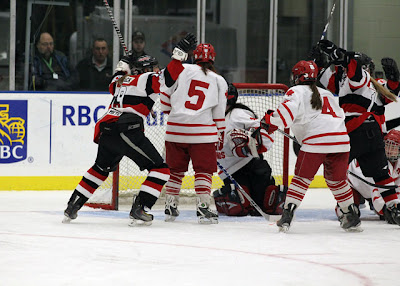 REGINA, Sask. – The Notre Dame Hounds may have started off on the right foot in their last round robin game of the Esso Cup, with Olivia Howe (Moose Jaw, Sask.), tipping in her own rebound just three minutes into the matchup, the Thunder Bay Queens quickly came back to upset the first place team and claim a 5-2 victory – as well as the top spot in the standings – Thursday inside the Co-operators Centre.

The Queens capitalized on a trio of power plays, including two in the last five minutes of the first period, to take the lead throughout most of the game. Brittany Zuback (Thunder Bay, Ont.) of the team representing Ontario slid the puck into the net at 16:04 in the first, with assists going to Michela Cava (Thunder Bay, Ont.) and Kaitlyn Quarrell (Thunder Bay, Ont.) to tie the game. Another Notre Dame penalty helped Thunder Bay make it 2-1 in their favour, with Quarrell getting her second point and first goal of the game at 18:33 in the period.

But it certainly wouldn’t be Quarrell’s last goal of the game. She put the Queens up 3-1 by firing the puck over the shoulder of netminder Tamber Tisdale (Red Deer, Alta.) while her team was shorthanded at 6:20 in the second, and followed up on her goal by putting away a power play marker at 12:33 in the period to make it 4-1 with an impressive natural hat trick.

The Notre Dame hounds, who have dominated the ice throughout much of the tournament, likely had a pep talk in the dressing room during the intermission, since they came out of the gates in the third ready to prove why they’ve been in first place for most of the week. Taylor Woods (Wilcox, Sask.) of the team from the Pacific region tipped in a shot at 17:31 in the third, but not before Brittany Berisoff (Kelowna, B.C.) scored Thunder Bay’s fifth and final goal of the game. 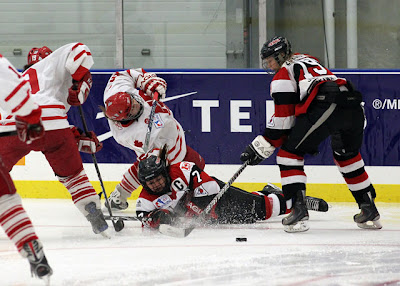 All in all, it was a competitive matchup between two of the best teams to hit the ice in Regina this week, but the Queens claimed the victory at the end of what could be a preview of Saturday’s gold medal game, which will be television on TSN2 at 4 p.m. CT.

Defenceman Gabriela Stewart (Mississauga, Ont.) was named Player of the Game for Notre Dame for her work on the blue line, while Quarrell is taking home that honour for Thunder Bay for her incredible contributions to her team’s win, including a very rare natural hat trick.

GO QUEENS! On their way to the semi-finals and medal round.
Posted by AtomicZombie at 11:43 PM