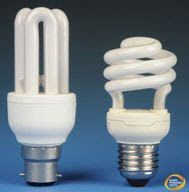 Before seeing the videos and reading the reports, we used to have these in every light in our house. Brad developed a serious rash on his face last winter and he has finally found out the reason: those energy saving light bulbs emit Ultraviolet Radiation (UVR) and are causing health problems for people around the world, namely sunburn like rashes and blisters and migraine headaches.

The UVRs have been reflecting off of monitors, walls and ceiling directly onto his face, causing an itchy rash, redness and severe headaches. A friend of ours who also works many hours in his home office reports a rash and blemishes on his face over the past year, as well as severe headaches, too, after he changed all of the light bulbs in his house to the energy efficient ones. Who would have thought that these so-called environmentally-friendly bulbs could cause such adverse health problems. It's been an eye opener for us.

Explains the rash I would have on one arm after sitting at my desk for awhile, especially in the winter months when I would have my desk lamp on for at least several hours at a time. My desk lamp had a compact fluorescent light in it for over a year. Once in awhile I do get heat rash on my arms and legs while gardening outside in the summer months, but using sunscreen seems to ward off the rash.

So, it seems that one needs to wear sunscreen when being in close proximity to these "energy saving" lights, too. Nice of the manufacturers and our health gurus in Canada to warn us about the potential health hazards. Thankfully, UK scientists and health advocates have been on the ball investigating the consumer reports about rashes and migraines, years before Health Canada even considered looking into the issues.

According to the Health Protection Agency in a 2008 report on the emissions from compact fluorescent lights:

"New research by the Health Protection Agency has shown that some energy saving compact fluorescent lights can emit ultraviolet radiation at levels that, under certain conditions of use, can result in exposures higher than guideline levels. The Agency and Government Departments are calling on the European Union, relevant product standards bodies and the lighting industry to consider how product standards for lights can be tightened up.

Given its research findings, the Agency is recommending some precautionary measures for the use of certain types of compact fluorescent light bulbs (CFLs). The Agency's view is that open (single envelope) CFLs shown in Fig. 1 should not be used where people are in close proximity - closer than 30 cm or 1 ft - to the bare light bulb for over 1 hour a day. The Agency advises that for such situations open CFLs should be replaced by the encapsulated (double envelope) type shown in Fig. 2. Alternatively, the lamp should be moved so that it is at least 30 cm or 1 ft away."

How many of us have lamps with these light bulbs sitting on our desks, bedside tables, in our living rooms, in our children's rooms, in close proximity to where we sit and sleep?

Considering how much time most of us spend in front of our computers and how often our lights are on, especially during the winter months, we should be more concerned about the UV ray emissions from these light bulbs and the health problems they are reportedly causing.

Videos and reports are here on Global Calgary: http://www.globaltvcalgary.com/Special+Features/LIGHT+BULBS+RAYS/969860/story.html

The news team travelled to London, England to get answers. Of course, Health Canada has yet to issue warnings, and regular light bulbs will be phased out in 2012, so maybe we should be stocking up on the "old school" light bulbs.

We changed every light bulb in lamps in our rooms back to the old ones.

Posted by AtomicZombie at 12:01 PM