After cutting the second shape from the first one, both should be placed in a vice so that edges can be cleaned up and both parts made equal. The two shapes shown in Figure 9 are very close, but not perfect due to small errors made while following the lines with the grinder disc. 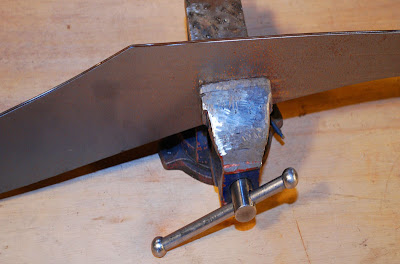 Figure 10 – Using the sanding disc to make both parts identical

To even out the two parts, place them both in a vice as shown in Figure 10 so you can work the edges with a zip disc. It only takes a few minutes of grinding with the zip disc in order to make both parts identical. Once you have two identical side walls, it is easy to take an edge measurement and make the other two tubing walls in order to create a complete tube. Technically, you are making a square tube, although the side profile is far from square. 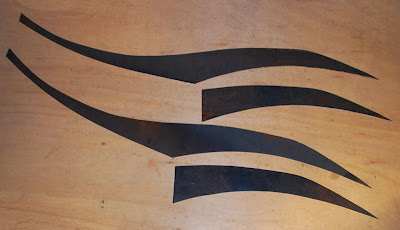 Because of the generally random shapes being made and having no real plan as I go along, it is very difficult to classify each part and impossible to give measurements, since I did not take any. Of course, the goal is to show what can be done using only a grinder and a welder, and you will most certainly want to make your own version of the Terminator, so let your imagination run wild.

The two new shapes shown in Figure 11 will form the inner walls of the lower front forks. I only made sides walls for the lower inner section of the front forks since the part of the forks above the wheel will form an archway and a sold front shape. This will make more sense if you read glance ahead at some of the completed front fork images. Again, I am “winging it” without any plan whatsoever besides wheelbase and fork length, so you are on your own if trying to make the frame similar to mine.

Figure 12 – Measuring a curve using some wire or string

So far, all of the pieces cut have been the sides of the tubing, or the visible sides that show off the free flowing curves of the frame and forks. To create full tubing, 1.5 inch wide strips will be cut and welded along the edges of each shape to form a solid tube. Now, how do you cut a strip that will be the same length as the edge of an arc, you are probably wondering. Let me show you a simple trick.

Figure 12 shows the overall length of the part as indicated by a measuring tape. The problem is that the outer curve is longer than the length of the part and the inner curve is shorter. You could certainly cut a piece using the length shown by the measuring tape and simply trim it off later for the inner curve, but the outer curve needs to be measured somehow. The easiest method is to bend some wire or lay down some string along the curve, and then just pull it straight after to measure the length needed.

Simple arcs like the one shown in Figure 12 can also be measured by rolling them along a surface like a wheel, marking the start and stop points to get the distance. The string or wire method always works, and if you can add an extra inch or two, then you will never come up short.

I decided that all of my frame and fork contours will be only visible from the sides of the chopper, and that the general thickness of the front fork tubing on each side of the wheel will be 1.5 inches.

Figure 13 shows a few lengths of 1.5 inch strips needed to create tubing by following the edges of the shapes shown in the previous photos. If you plan to need a lot of 1.5 inch or similar size “stripping”, then you could also purchase the appropriate width and thickness flatbar to simply cut to length. Being hardcore, I decided to make my entire frame from the same sheet metal. 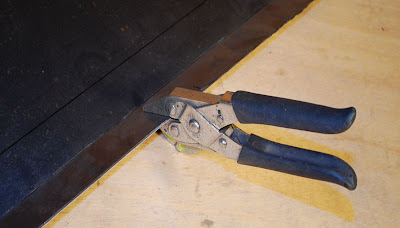 When you are making long straight cuts in the sheet metal, you only need to “score” along the line, cutting about half way into the steel. After cutting along the line, grab the part with pliers and bend it back and forth until it snaps free. The edges will be razor sharp and certainly need the sanding disc treatment, but you do save time and zip disc wear using this method of cutting. 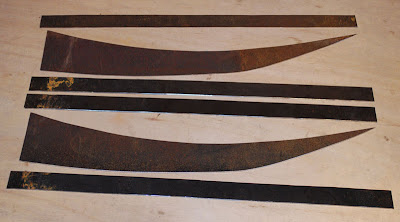 Figure 15 shows the strips of 1.5 inch sheet metal that will be welded along each arc to complete the lower part of the front forks that will hold the front wheel in place. As you can see, I wasn’t kidding about how much work this project is going to be. This is only a small sliver of what is to come.