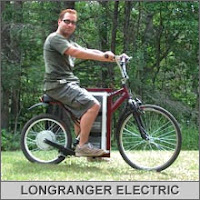 The LongRanger electric bike fills a gap between the electric motor assisted mountain bicycle and the fully street legal electric motorcycle or scooter, allowing you to commute great distances at speeds typical of a standard human powered bicycle.

Because the LongRanger looks and feels much like a standard mountain bike, it will happily live on bike paths and trails normally off limits to larger motorized vehicles. The LongRanger can be built to travel well over 62 miles (approximately100 kilometers) on a single charge, and will do so at speeds similar to that of city traffic.

The LongRanger is a perfect way to commute long or short distances and enjoy nature without creating pollution - noise or environmental. In most parts of the world, you do not need a license or insurance to ride a small electric bicycle, and in communities where there are no existing electric bicycle laws you should be able to blend right in with typical bicycle traffic.

And, by adding a solar charger to your system, you could have a maintenance free form of transportation that will cost you almost nothing to run, out perform many commercially available small electric vehicles, and you can ride proud knowing that you built it from the ground up.
Posted by AtomicZombie at 1:51 PM