We've been getting a number of requests to revive the Arcturus Human and Solar Powered Motorhome site, so it's now back online. Since we moved recently and are still unpacking, this project is on hold for awhile. 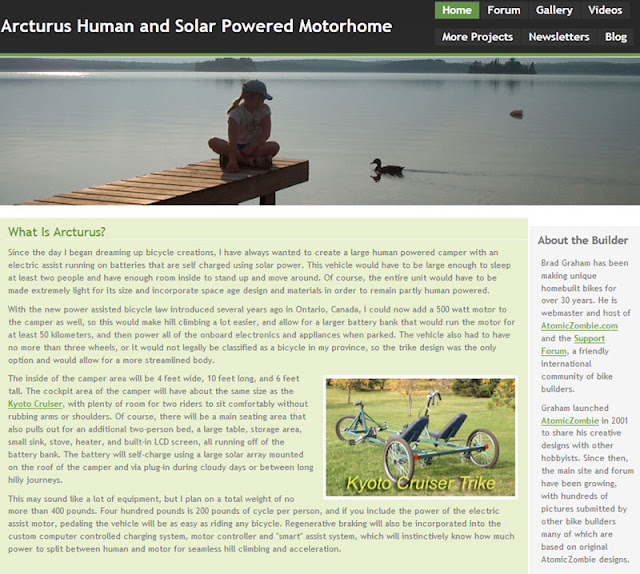 "Since the day I began dreaming up bicycle creations, I have always wanted to create a large human powered camper with an electric assist running on batteries that are self charged using solar power. This vehicle would have to be large enough to sleep at least two people and have enough room inside to stand up and move around. Of course, the entire unit would have to be made extremely light for its size and incorporate space age design and materials in order to remain partly human powered.

With the new power assisted bicycle law introduced several years ago in Ontario, Canada, I could now add a 500 watt motor to the camper as well, so this would make hill climbing a lot easier, and allow for a larger battery bank that would run the motor for at least 50 kilometers, and then power all of the onboard electronics and appliances when parked. The vehicle also had to have no more than three wheels, or it would not legally be classified as a bicycle in my province, so the trike design was the only option and would allow for a more streamlined body.

The inside of the camper area will be 4 feet wide, 10 feet long, and 6 feet tall. The cockpit area of the camper will have about the same size as the Kyoto Cruiser, with plenty of room for two riders to sit comfortably without rubbing arms or shoulders. Of course, there will be a main seating area that also pulls out for an additional two-person bed, a large table, storage area, small sink, stove, heater, and built-in LCD screen, all running off of the battery bank. The battery will self-charge using a large solar array mounted on the roof of the camper and via plug-in during cloudy days or between long hilly journeys.

This may sound like a lot of equipment, but I plan on a total weight of no more than 400 pounds. Four hundred pounds is 200 pounds of cycle per person, and if you include the power of the electric assist motor, pedaling the vehicle will be as easy as riding any bicycle. Regenerative braking will also be incorporated into the custom computer controlled charging system, motor controller and "smart" assist system, which will instinctively know how much power to split between human and motor for seamless hill climbing and acceleration.

Getting and Cleaning the Differential

After much hunting, I have finally scrounged up an older front Jeep differential to be used as the "foundation" for the drive, steering, and braking systems on Arcturus. Initially, I thought a Jeep differential might be too heavy for this project, but after adding up the weight of a home built front wheel drive steering and suspension system, I realized that this was definitely the way to go.

By using this 150 pound Jeep differential to contain most of the complex mechanical systems, I actually save weight and end up with an extremely robust and easy to repair design that will last a lifetime. The plan is to adapt a belt drive to the differential so that a very powerful and efficient DC motor can drive the two front wheels.

The steering, suspension, and braking system is also included in the front differential, so all of the complex and mission critical mechanics are contained in one area, allowing the rest of the frame and cabin to be made as light as possible. We will be sitting directly over the front wheels in the final design, so it will be easy to connect another control rod to the right control arm in order to create the under seat steering system for the pilot.


When steel sits outdoors exposed to the northern elements for more than 30 years, one can expect that there will be a fair amount of rust. Although it looks pretty bad in this photo, both flanges spin freely and there is almost no resistance when turning the drive pinion. The brake rotors look pretty bad, but the plan is to machine them down way below specification to make them lighter since they will not see anywhere near the force in this vehicle.

Once the entire differential is stripped bare, sandblasted, and re-greased, I think it will look and function as good as the day it rolled off the assembly line in 1978. Another nice thing about this differential is that the drive line can be turned off by simply cranking the 4x4 dial around. Having the ability to make the drive wheels "freewheel" could really come in handy if an electrical malfunction was to occur.

Being able to disconnect the drive system in order to push the vehicle out of harms way will be a nice feature just in case"  More here.

Save money. Build your own bikes.

Posted by AtomicZombie at 3:05 PM