February 12, 2006
Science exhibit comes calling
It's a balmy -8° C, sunny and bright. Feels more like early spring than February. For this time of year, in this neck of the woods, that's unseasonably  warm.
It never ceases to amaze us how people find out about Atomic Zombie Extreme Machines. A few days ago, someone (Terry) from the Telus World of Science in Calgary posted on the forum that they are having a bike exhibit  from the National Museum of Science and Technology, May through September 2006. He was looking to have a Spincycle or tandem for a hands-on display where the public can ride bike(s) in the indoor arena. 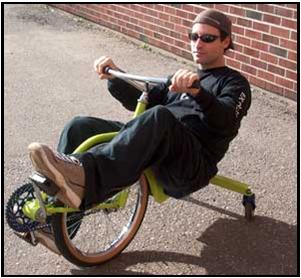 Of course, I replied right away on the forum that we would send a Spincycle for the exhibit. What an honour to be included in this event! Once the site is done, Brad will be out in the garage making some mods to a Spincycle to send to Calgary in March. Maybe we'll plan a little vacation and go there, if we can squeeze in a road trip. I think it's a two-day drive to Calgary. Haven't been there since I was a kid.
A couple of years ago, the Canada Science and Technology Museum in Ottawa expressed an interest in acquiring the World Record SkyCycle for a bike exhibit, but the shipping cost for the 14' 3" beast was too much. So, it spent another winter towering over our backyard until the summer of 2005 when it was hacked up for parts.
It was quite an attraction for a couple of years, even folks from across Canada and the U.S. visiting or passing through our city stopped by for a look. In hindsight, we should have kept a guestbook, but never thought it would become a tourist attraction. SkyWalker is still in one piece. Brad still takes it out for a spin now and then.
The web site is coming along very quickly. Brad spent most of the weekend re-doing the photo gallery. It's a ton of work! ChopZone.com will be fully integrated into AtomicZombie.com. It was too time consuming to have two separate galleries and sites to maintain. Using Flash will simplify things and there will be lots of interesting stuff to appeal to everyone. Can hardly wait 'til it's completely done and on-line. Brad is itching to get in the garage and start hacking again.

Posted by AtomicZombie at 9:47 PM