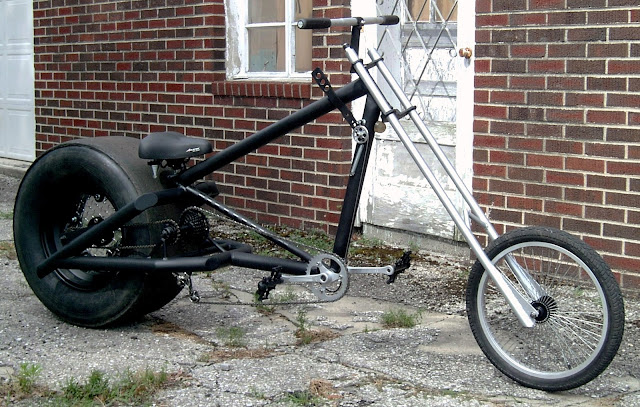 "Hello. I thought I would send a pic of my chopper that I built in June 2010. It is mostly scratch built. The only new parts are the chains, seat, grips and the diamond plate on the rear wheel. The rear wheel is a nascar tire mounted on a racing rim and the diamond plate is cut and bolted to a hub I made myself. There is a mechanical disc brake on the back and is controlled by the lever up front.

The forks and triple tree are made from 1/4" steel plate and rigid electrical conduit. The frame tubing is mostly from an old cattle gate I found at a farm. I also fabbed up the jack shaft. For now it only has one speed but I am getting ready to add a small shift lever somewhere around the seat. Hope you like it.  Thanks. Jay Owens, Garage Floor Designs"


OverKill is appropriately named because everything about it is way over the top. With its ridiculously wide rear wheel, and ultra long forks, what else could it be called other than OverKill? Does a chopper really need a dragster tire on its rear end, or such a high frame? Not really, but does a roadster really need a Hemi? You know where I'm going with this. Actually, the main reason I built OverKill to such outlandish proportions was to retaliate against the mass marketing of big box store choppers.

Posted by AtomicZombie at 2:58 PM