I've wanted one for some time too, so we're going to build two of these babies at the same time! We're going to do some sort of fully independent drive system on them." 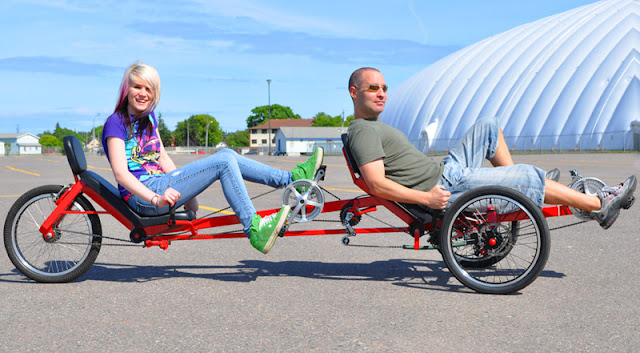 Viking Recumbent Tandem Trike DIY Plan
Note: this is a very large file and probably cannot be downloaded if you have slow, or dial-up Internet service

The Viking is a very unique tandem trike that includes an independent transmission system that allows one rider to stop pedaling without affecting the other. The Viking Tandem Trike uses commonly available 20mm disc brake hubs, so there are no hard-to-find or overly expensive components needed. The frame is completely made of square steel tubing, and everything else on the Viking Trike can be found at bicycle shops or hacked from scrap bicycles.

The building process is designed to allow anyone with a Do-It-Yourself desire to finish his or her own version of the Viking Trike without requiring previous bike building experience or specialized tools and skills.

The plan is laid out in a format that makes customization or alternate parts usage a breeze, so you will certainly be able to include your own imagination in the process of building a recumbent trike.
If you have been eyeing up those expensive imported tandem trikes, but think $8000 is a bit too steep of a price tag, then get out your tools and build it yourself! For thousands of dollars less than the price of a basic tadpole trike, you can create your very own tandem trike that will rival many of the factory built machines available.

Take a look at our Builder's Gallery to see other Viking Trike examples, including many creative modifications to the plan. Our international builders community ranges from students to retired engineers, but they all have one thing in common - the desire to build their own stuff!


All of our plans are delivered as PDF files containing high resolution images and diagrams for optimal viewing and printing. See our collection of DIY plans here.
Posted by AtomicZombie at 3:41 PM