Handmade bike building has many benefits - a builder's story 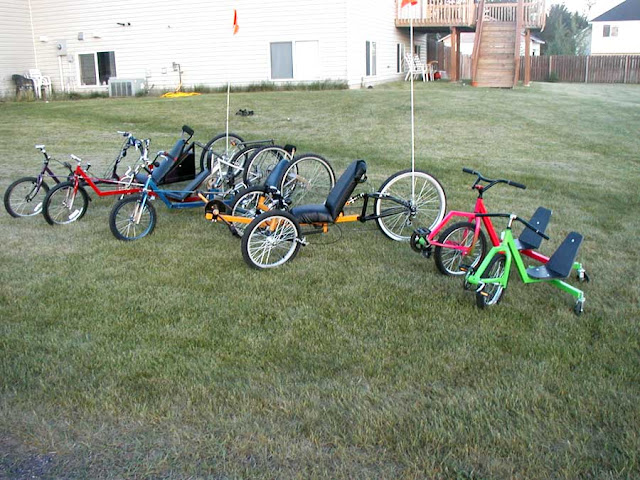 "Bicycles are a great way to get into shape, or just to enjoy a lazy afternoon stroll in the park.  When you build your own contraption, it makes it even more enjoyable, in my opinion.  There;s just something about feeling the cool breeze on a summer nite on something you have created with your hands.

My name is Jason Laurich and I live in Princeton, MN, and have been building bicycles for a few years now.  Putting things together, and thinking through the challenges of a build is a great joy.

I even think it's a bit relaxing. The bikes in the picture were all built out of that love for "the trade".

We, (my three boys and I ), have been known to make that 10 mile trip to the Dairy Queen several times a month.

My greatest desire is to see kids enjoy the ride, so if you know anyone who might benefit from a bike (especially a tadpole), or they can't build one for whatever reason, please contact me at shockcycle@gmail.com.


P.S. The yellow bike in the picture actually went to a 12yr old boy who had some ballance issues. When I delivered the bike to him, I had to make some adjustments. His dad and I gave him a push and he had the biggest smile. Priceless.  His mom was in tears, and said she had never seen him ride a bike before.

Wow! It was then that I realized I was at the crossroad of where someone's talent met someone's need.  What a cool place to be.  Thanks soooooo much for inspiring me."


What a great story! Thanks for sharing, Jason. Hope it will inspire others to get building,
too.

Posted by AtomicZombie at 5:07 PM