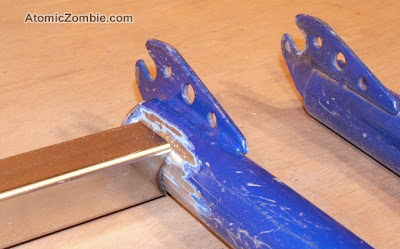 The basic triangular frame needs three tubes to hold it together, one at the rear to join the two rear forks, and two more tubes at the front to form a triangle between the fork crown area and the head tube. Shown in this photo is the tube that will join together the two rear forks, creating the frame to whatever width you like. A fishmouth cut is ground out at the ends that mate with the round fork tubing. The tube should be placed about half an inch from the end of the fork leg tube so there is room to make a weld.

With the parts sitting on a flat surface, tack weld the rear frame tube to the two rear forks as shown here so that the fork legs are at 90 degrees to the rear frame tube. Because both forks are sitting on the same flat surface, vertical wheel alignment will be almost perfect, and as long as you get both forks running parallel, horizontal wheel alignment will also be perfect. If the two rear wheels are badly out of alignment, there will be scrubbing on the road, which will decrease battery run time, so try to get the wheels running as true as possible.

Once you have completely welded the rear frame tube, join the two rear forks together so that you can continue the frame layout, adding the two front frame tubes that will form the triangle as shown here. The two front frame tubes will determine the wheelbase (length) of your trike, which should be fairly close to the original bicycle wheelbase so that your pilot can reach the handlebars comfortably. Also shown in this photo is the front head tube which should be set at 90 degrees to the frame tubing, which will result in a final angle of about 65 degrees once all three wheels are installed. The joint between the head tube and the two front frame tubes needs to be ground out (fish-mouthed) to conform to the head tube so that you can make a decent weld along the joint. 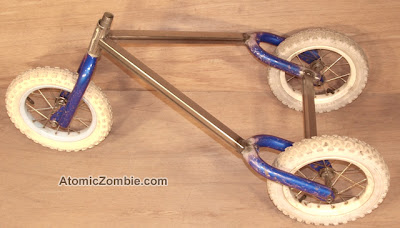 Once the head tube has been welded to the frame, insert the forks and three wheels to check your rolling frame. The head tube angle is now close to that of a standard bicycle (between 65 and 68 degrees), so your trike will handle just like a regular bicycle. Now you can finish all the frame welding to secure the main frame triangle to the head tube and rear forks. 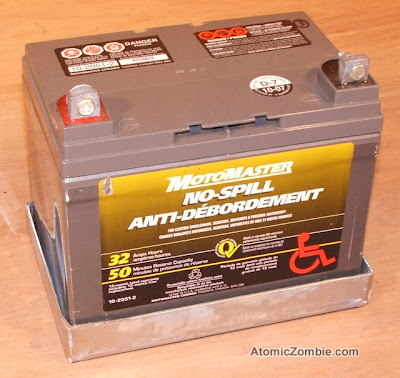 The biggest complaint when it comes to kids and their electric vehicles is how quickly the battery goes dead. On the original stand up scooter, you could barely go around the block once before the battery started to give it up. By using a much larger battery and half the voltage, the new trike will run almost all day on a single charge, and allow the vehicle to get up hills that would normally exceed the smaller battery packs immediate discharge capacity.

Sure, the large battery is quite heavy, but that simply adds stability to the trike, so it won’t tip over as three kids try to stand on it as they roll over the curb. Another very important thing to note when choosing a battery is to ensure you use Gel cell, or non-spillable battery, which is a must for a kid’s vehicle. Unlike a typical lead acid battery, this battery will not leak any dangerous chemicals, even if turned upside down, so don’t use any other type of battery. 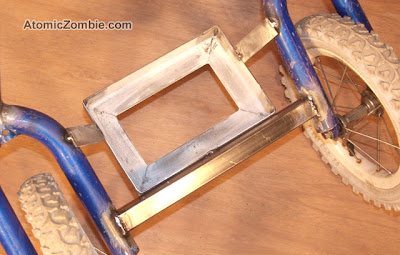 The battery will live between the two rear forks as shown here, supported by a few bits of flat bar which have been welded to a battery support base made of angle iron. The battery box base should place the battery at least 4 inches from the ground, so it doesn’t bang on small objects which may roll under the trike as your kids drive it through hostile territory. 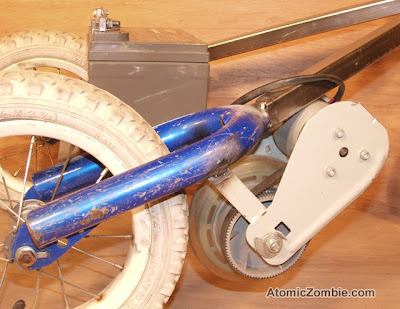 The drive motor can practically anywhere on the trike, on any one of the three wheels, but it stays neatly out of sight when positioned under one of the rear forks as shown in this photo. Use whatever means necessary to place the scooter’s drive wheel up against the trike’s wheel so that there is a decent amount of friction between the two wheels.

Inflate the tire to the proper pressure before you do this, and try to keep both the drive wheel and trike wheel inline, so that sideways friction is avoided. There should be enough friction between the two wheels that it takes a bit of force to make them slip, but not so much that they are difficult to turn by hand. The little scooter motor is not very powerful, so a little slipping off the start is better than so much friction that the motor overheats and burns out. A nice smooth tire or at least minimal tread at the point of contact is also a good thing.

Posted by AtomicZombie at 1:35 PM