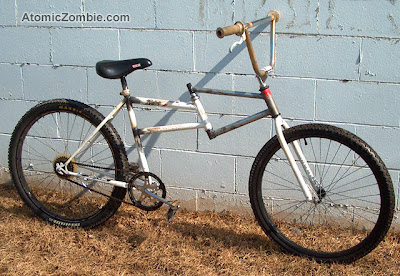 Here is the completed and unpainted SideWinder ready for its first test run. For best results, I found that a taller set of handlebars were optimal, and did not bother with any gears or brakes since this was mainly going to be a parking lot fun bike. To make a single speed, put the chain on the center chain ring on the rear wheel and cut the chain to fit. If you do intend to add a brake to your SideWinder, then only add a rear brake as a front brake will cause an instant and brutal jackknife to occur due to the front end wanting to fold into the rear of the frame. 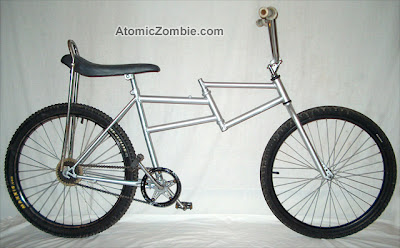 The initial test ride went as well as can be expected on such a crazy bike, so I painted the frame and switch to a banana seat to make it easier to shift weight around when doing stunts. The SideWinder ended up being a very fun bike to ride, once I mastered the ability to pull the front wheel only inches away from the rear wheel while in motion.


The SideWinder can fold almost right in half, making it a unique variable wheelbase bike that can turn around in about the space of a single sidewalk block. By shortening the wheelbase, the turning circle is drastically reduced, making the sidewinder seem as though it can spin in a circle or slither around a corner in ways that defy logic. 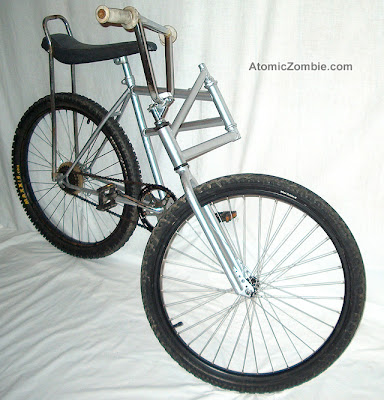 Find a nice quite place like a parking lot for your initial test ride (crash test). You will probably find it easy to ride the SideWinder while it is in the relaxed (straight forward) position since it is not much different than a regular bicycle except being slightly longer.

Get moving at about a jogging pace and then pull the handlebars towards your body as you kind of swing to once side, turning a bit in the same direction. At this point, the frame will pivot, and you can bring the front wheel closer to the rear wheel.

If you keep steering straight ahead, then the bike will tilt backwards yet still ride somewhat normally, although it will look like a train ran over your frame to onlookers! Once in the folded position, try to steer towards the direction of the frame pivot, and you will be able to zip around in a very small circle.

Of course, you will probably jackknife and face plant a few times as you get used to the odd feeling of riding a folded bike with a 12 inch variable wheelbase! Keep practicing and you will be able to do all kinds of bizarre turns and slithers in no time. 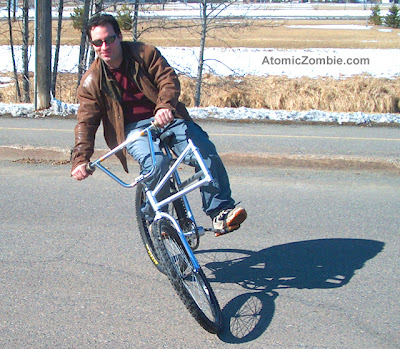 One of my favorite things to do on the SideWinder is to ride towards someone so everything looks normal, but just as I get within a 20 foot distance, I crank the frame into a tight fold and do a few loops, switching to the other side right after to complete an unbelievable figure 8. To the unsuspecting onlooker, it would appear that my bike just experienced a total frame failure, but somehow I was able to keep riding it! Of course after a few turns, it becomes apparent this is no regular bicycle, but in fact a circus ready stunt bicycle. Be safe and have fun!

Posted by AtomicZombie at 12:20 PM