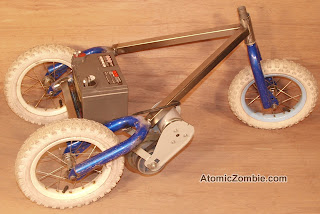 This image shows the drive motor and all three wheels installed on the basic trike frame. If I hold up the drive wheel and drop the motor wires across the battery, the drive wheel hums along, and seems to power the trike with a reasonable amount of force when it is on the ground.

Take note of which way the wheel turns according to wire polarity, so you don’t end up with a backwards moving vehicle after finalizing the wiring. Yes, the scooter wheel must turn in the opposite direction of the trikes rear wheel, or counterclockwise to move forward. If you have a large double pole, double throw switch, then you could even add a reverse function to the trike. 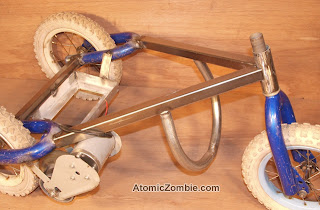 A very simple foot rest can be made with a piece of bent tubing, or a pair of conduit elbows welded together as shown here. Again, I try to use up whatever bits of scrap tubing are laying around the garage, so feel free to experiment with whatever foot rest designs you think will work. 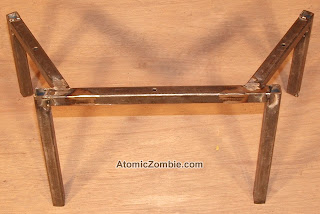 The seat will be placed over the battery, helping protect the wiring, and to keep meddling hands out of the electrical bits. Using some ¾ tubing, or whatever scraps you have in the junk pile, make a basic seat frame like the one shown here that can be welded to the frame, allowing the seat to cover the battery, yet also allow the removal of the battery. An old kitchen chair with metal legs is a good source of metal for the seat frame as well as the seat cushion. 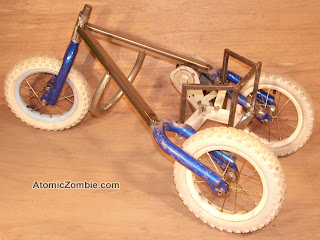 There is nothing critical about the seat frame other than allowing a comfortable sitting position and easy removal of the battery for charging or swapping. The simple seat frame shown in this photo allows the battery to drop into the battery box from the front of the trike once the seat cover has been removed. 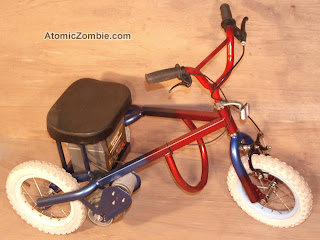 Once you finish all of the welds and paint your trike, the young pilot will be able to hit the trails on a long running environmentally friendly vehicle. Of course, you have to do a bit of electrical wiring first in order to transfer electrical power from the battery to the motor, but since it is a simple matter of adding a switch in series between the two, there is no need for a circuit diagram. Just run one wire from the battery to the motor and then one from the other battery terminal to you switch, and then from your switch to the other wire on the motor.

If your scooter came with a throttle switch like mine did, then simply install the electrical system exactly the way it was on the scooter. If you have no throttle switch, then find a contact switch that can handle your motor’s power (5-10 amps typically), and you are ready to roll. I also added a front pull brake to the completed trike shown here although it was probably not really necessary due to the limited top speed and the fact that it stops moving within a few feet once the throttle is off. 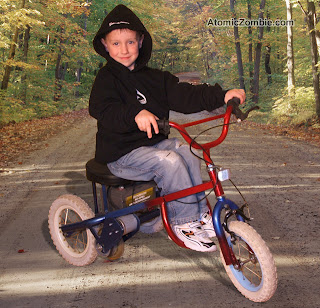 The completed kid’s electric trike runs for many fun hours on a single battery charge. Top speed is limited to a “kid safe” level due to the lower voltage, and even if the trike stalls, the motor will not burn out because there is a limited amount of slip in the friction drive. This trike is so well behaved that it could be used indoors, and if you install white rubber tires, there will be no track marks on hardwood or linoleum floors. Oh, and yes, the trike can also move a fully grown kid around, as I have found out! Be safe and have fun.
Posted by AtomicZombie at 4:29 PM