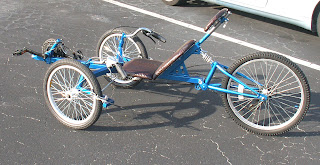 "I finished my StreetFox. The plans were a pleasure to use. I built it just as laid out in the plans. I installed the shock horizontally, just so I could use the neat bracket from the Mongoose 24” mountain bike I got for $10. I felt the front tube looks unfinished even with a cap. I cut a fingered end on it and pushed a 21 cell LED flashlight in.

My seat is rubber pipe insulation about 1” thick with crocodile vinyl over. I also used 1 1/2” skate wheels for the chain guide (though in retrospect I wouldn't do that again – they work fine, but the chain can jump off when you hit big bumps). I added a few gussets, more for looks than anything. The bike is very comfortable, and I'm 6'4” and 270 lb. Between flame flex and the shock, the ride is great, even off-road."

More of Tom's ride report will be featured in the April newsletter. Stay tuned for announcements.

Posted by AtomicZombie at 1:40 PM