Tom D. of Biloxi, Mississippi, writes, "Hey Atomic Zombies. I was wondering what it was like building the Gladiator Chopper." I dug through our blog archives from 2007 (three years ago already!) and found this entry: 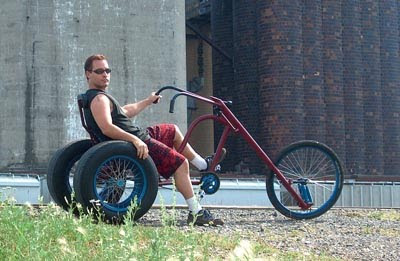 Well, after nearly a month of sweat, blood and tears - literally - the baddest chopper of the Atomic Zombie Extreme Machines family is cruising the streets. This phat chopper even makes Harley riders stop and gaze in amazement. Brad went for a half-hour ride yesterday and eventually came back nearly an hour-and-a-half later.
"I can't ride half a block without someone waving me down, or running up to me to take a look," he said yesterday, amazed that so many people want to ask questions about the Gladiator.
I've ridden it, too, and it's amazingly comfortable, easy to handle, smooth. You forget there are two car wheels; it's that smooth.
It really was a labor of love, and Brad has some scars to prove it. I'll spare you the gory pictures, though.
He got a nasty burn on his arm after touching a piece of freshly welded metal; poked himself in the eye with a wheel spoke; caught his shirt on fire; hammered on his finger and now the nail is black; and yesterday, gashed his head on the chain ring that was hanging up to dry after being painted. He bent down to pick something up off the floor, then "Crunch!" - one of the ring's teeth dug into his head, leaving a half-inch gash. I walked into the garage to ask him something, and he asked me to look at the wound.
"Yep, it's bleeding, dude. Might need a couple of stitches." I cleaned it up, applied direct pressure, added some antibiotic stuff and the bleeding stopped. Back out to the garage he went. He HAD to get the Gladiator on the road that day for it's first official test ride as the newest completed project. He HAD to ride to his buddy's house and show him. Now, that's dedication to the cause! 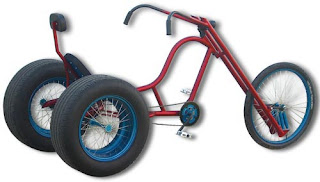 Add to the physical injuries - building the beast in a 90 degree garage! Definitely lots of sweat went into this build. The tears - well, not much - but Brad wasn't very happy with the paint job at first. It seems the manufacturer of the type of paint he normally uses added some sparkle-speckle crap to their brand and he wasn't thrilled about it at all, especially since it's not stated on the can.


Let's just say that projectiles were launched in the air in frustration, but he's ok with the final result now thanks to some positive feedback yesterday.
How frustrating, though, to put in so much work, only to be disappointed with the quality of paint, especially when it's made by a manufacturer whose products you've used for years. It all worked out in the end, and soon the download will be available so everyone can build their own Gladiator style chopper!

Posted by AtomicZombie at 3:55 PM