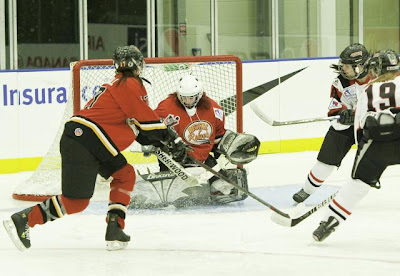 CALGARY, Alta. – Hockey Canada announced Wednesday a list of 109 players identified for a strength and conditioning camp that will take place from May 25-30 at the University of Calgary.

The list of 109 players consists of 19 goaltenders, 33 defencemen and 57 forwards, many who have participated in Hockey Canada’s senior women’s, under-22 and under-18 programs. Invitees include Brianne Jenner (Oakville, Ont.), Jocelyne Larocque (Ste. Anne, Man.) and Jennifer Wakefield (Pickering, Ont.), who were all centralized with the National Women’s Team for the 2009-10 season. They were released from the team before the roster for the 2010 Olympic Winter Games in Vancouver, B.C. was announced.

The 21 members of Canada’s Olympic roster, as well as any senior program athletes who have been centralized with the National Women’s Team more than once, are not required to attend this camp.
The camp will consist of five days of off-ice fitness training and is considered an important first step in identifying this country’s future women’s hockey stars, including those who could be in the running to represent Canada at the 2014 Olympic Winter Games in Sochi, Russia.

The first step in Canada’s Program of Excellence, the National Women’s Under-18 Team meets twice a year, for a summer camp and three-game series, typically against the U.S., in August, and again for the IIHF World Women’s Under-18 Championship in January.