About 18 years ago before I knew about Atomic Zombie or for that matter the Internet, I wanted a different bike, so I got me a book from the local library about bicycles by a chap named Mike Burrows.

Being that sort of guy who wasn't satisfied with the common or garden variety of bike, I wanted a bike that was just a bit different to everyone else’s.

What I found in that book was a bike so different it blew me away! I discovered Mike Burrows Windcheetah - what a bike - or trike!

Back then it was only available as a kit of cast aluminum lug sections and a bunch of other bits and it needed some serious machining to build up. Back then I was limited to a box of spanners and a socket set but I had a dream. I got myself a cheap stick welder and a bunch of scrap bikes and started building.

I couldn't weld for toffee, but I was driven by this three wheeled bike in my head, something with pedals waaay out in front, two wheels by my side and a drive wheel in the rear.

For those that can’t weld, take a look at the ugly stuff in this trike! Not pretty but I was driven!

It's in a bit of a state as I haven't looked at it in about 8 years as I blew my welder when I decided to rebuild the rear end!

I didn't like the method of steering control on the Windcheetah, but when I sat in mine, my arms naturally hung down and hence under seat steering evolved. 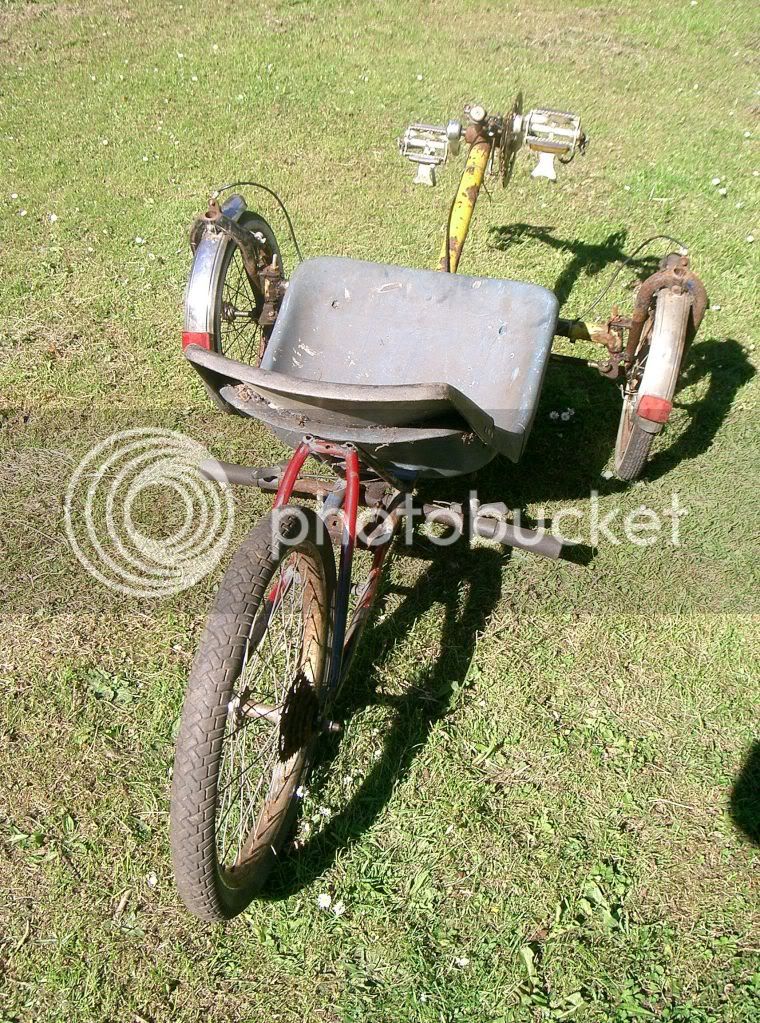 Some construction details next . . .

I had to think on my feet, I just had a bunch or wrecked bikes and a couple of push along scooters that were all the rage with the kids in the UK back in the 1990s. I had no idea about centre point steering or Ackerman, caster and chamber and so my initial efforts regarding steering were ugly and it rode just as bad.

The kingpins on the front axle were vertical and the steering arms on the hubs went straight back, it was a terrible ride. I knew that motor cars didn't suffer from the problems my trike had so I went back to the library and swatted up on car design and steering geometry.

One book I found by accident was about radio controlled cars from back in the 1960s, but the chapter on steering design was a boon to me. Armed with my new knowledge, I tore down the front axle and re-built it.

The only way I could think of hanging the front wheels with the bits I had was by using 16" wheels and front forks off of kiddies' bikes. The kingpins were formed by using a stripped down old steel front wheel hubs and mounting the former axle still in its de-spoked hub vertically in tubes at the ends of the front axle, bearings cones and axle forming the kingpin pivot.

The kingpins are bolted to the forks and pivot with the wheel riding on ball bearings as it used to in its old wheel configuration, only vertically. Study the photos and you'll get the idea!

Steering is a kiddie’s go-kart style to a central pivot on the front axle riding on two ball races taken from an old hoover motor hammered into a short length of bike frame tube .

A link arm to the handle bars finished the steering off. Simple, but it works. The main chassis is the remains of a push and go scooter and the old dropouts for the rear wheel formed the kingpin supports on each of the front forks.

The seat is made from two old school chairs with the back of one forming the upper back rest for the other and is quite comfortable.

Centre point steering was achieved partly by these kingpin supports and partly by canting the front wheels outwards, rather like the old 1900s racing cars. It gives the trike a bit of character and works very well.

The top kingpin support is set back, giving 1 1/2" of caster to the front wheels, and projecting imaginary lines from the king pins to the rear tire patch and setting up the steering track arm ends on this line sorted the Ackerman problem. 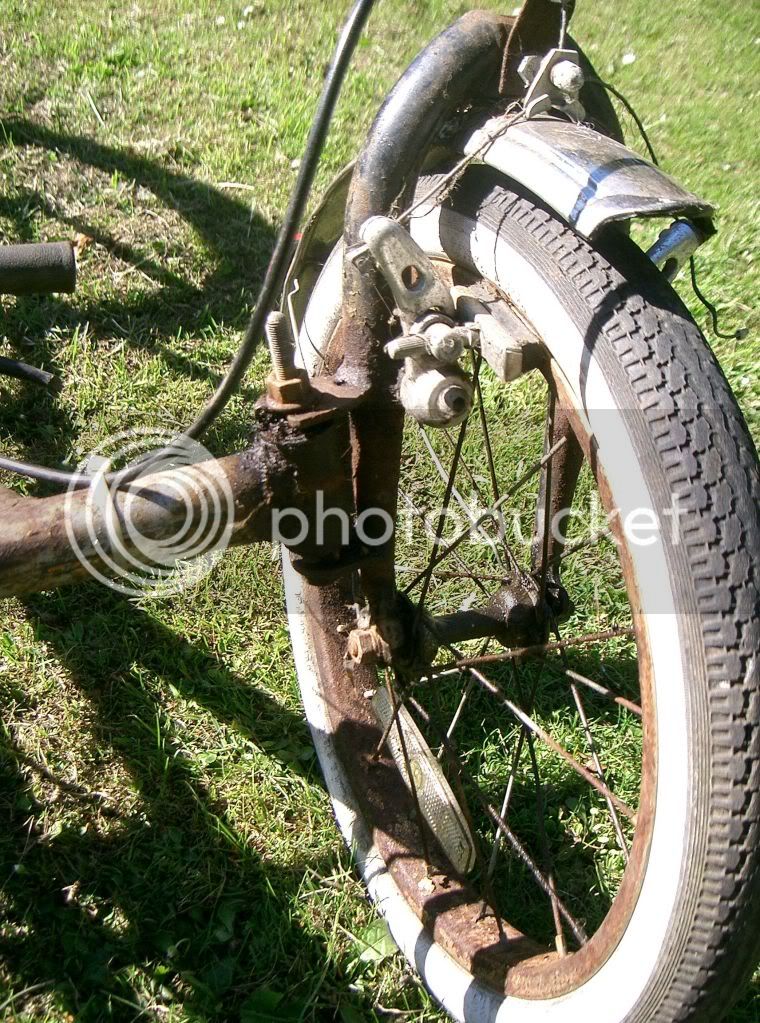 The trike proved very popular with the kids who live by me and the poor thing has been bounced off of curbs and skidded about on gravel. Those little 12" kiddy wheels have stood up to the punishment!

The rear wheel is a 20" hub set in rear forks from a 24" frame as the one that came with the wheel made the trike look stubby. Originally I welded up the back wheel frame twisted, I wasn't happy with it so I cut it away and at that point my poor little stick welder went pop and that was the end of that.

The trike minus a back end has languished at the bottom of my garden in a bunch of weeds for the last 8 years, when I dug it out all was seized and rusty, but with a little TLC and the promise of a new back end I coaxed her back into life!

With all the chatter here about trike builds, so I decided to give the old girl an airing and fix her up again. I'd forgotten how much fun I had riding the thing! I'm going strip it down, fix the dodgy welds, cover the seat with padding and sew up a new cover from black vinyl cloth and paint her. I'll post some photos when she's done!

Posted by AtomicZombie at 5:42 PM