After hurting my back I began to search around for alternative way to exercise and started checking out all the cool recumbents. The sad thing is that they are way over priced until I found this site (AtomicZombie.com) and began collecting some bit and pieces, plus buying two 21 speed mountain bikes from a salvage store for $20 each. Nice start, huh.

In the hot rodding world they have what are known as "Rat Rods." For those of you who don't know, these are hot rods pieced together from a wide variety of parts that one would not expect to see on a hot rod. I guess my trike would have to be called a "Rat Trike" because it is pieced together from whatever I could get my hands on cheap. I don't have a welder or welding skills so I've made do by just "piecing" things together. 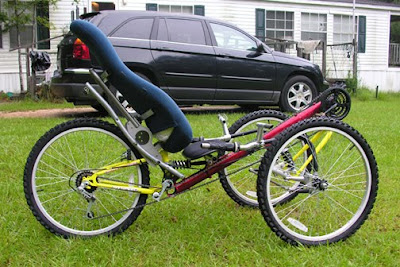 Some day I hope to get into welding so I can build a nice trike the right way maybe even build a recumbent chopper that looks cool. There are so many awesome examples to get inspiration from on this site. I'm posting a picture of what my trike currently looks like. I'm having some issues with the chain and shifting; so any advice would be greatly appreciated. I think maybe the angle through the tensioner sprocket might be too much; it's at 148-150 deg. I've posted several other pics of my progress in a facebook album .  ~ Thanks, Rick

Posted by AtomicZombie at 12:46 PM