No real stretch here. Dragonwood is a Wolf in Dragon's clothing. Actually the rear axle is from my Deltawolf. 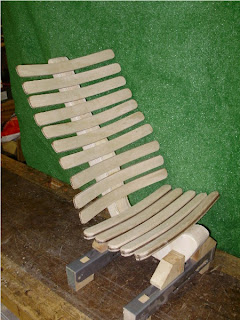 The build began July 2009. First came the seat spine laminated from 1/2 ply shaped to fit my back. I then laminated two strips of Ash and one Walnut into curved ribs for the seat and back. These were done by placing a block of wood on the bench and pulling the ends down with a pair of clamps.
Next came the main frame, an I-beam with a web of 1/2 ply capped top and bottom with laminations about 1 1/4 wide by 3/4 thick. The beam curves up to meet the steering post and was made overly long. I then dry fit the seat to the beam and figured distance from seat to bottom bracket (located just behind the curve in the beam). I could then locate the rear axle.
Using wood solids and laminates I made the rear axle using rear axles, pillow blocks and disc brakes from my Wolf. I then bolted the steering post in place, after welding on plates, and put the rear wheels on and sat down, feeling pretty self-satisfied. 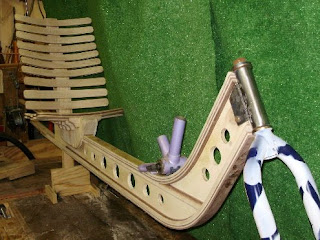 Did I mention I weigh 300 lbs? The frame twisted over like a - well you know what I mean! So, now I've revealed where the artistic flow in the frame comes from. I formed the curved laminations to counteract the torsion. I began by clamping a single strip in place at one end and then twisting and bending until I liked the curve then clamped the other end.
The next day when the glue was dry, I added two more layers with many clamps and so on for several days until enough thickness was built up. I then decided to use solid 3/4 Ash to stiffen the neck area. This was heavily contoured using a circular carving rasp disc in my grinder. 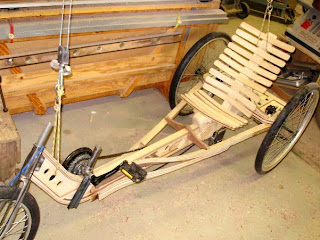 Handlebars for the under seat steering were built up in a simple frame to hold the bends in place. The ends were drilled out for short lengths of metal handlebar to hold the brake clamps and shifter and then I lathed turned grips and slid them on the tubes.
A 4-speed hub was mounted under the seat acting as a crossover and transmission. I tack welded a small chain sprocket to the off side and led the chain to the rear axle. I carved the head and mounted it and used two LED blinking bike lights for the eyes. Last thing was to cut fender shapes from 1/4 ply and then bend strips into the dragon wing ribs. Finally finished April 2010. More than 10 months! 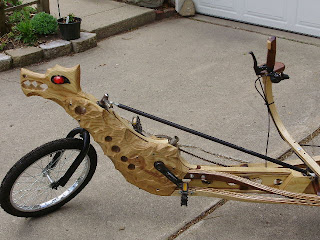 What started out to be a simple wood beam Wolf style racer turned into a heavier artistic expression to be ridden in parades and fun rides. Over the winter (after beginning the build) I developed nerve problems in my legs which is limiting my pedaling ability. So, I'm going electric assist and plan to put a front hub motor on the Dragon. There is room behind the seat for batteries. I don't have any intention of giving up. Stand by for the next trike already on the drawing board with parts being collected. 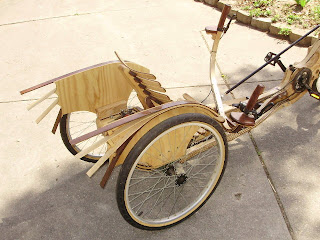 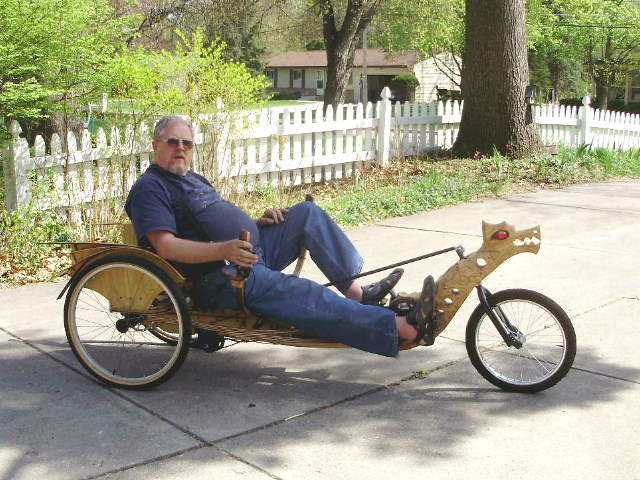 Posted by AtomicZombie at 6:36 PM