With the warm weather finally here and the garage clean once again, I wasted no time, jumping right into the first project of the year, a tandem tadpole trike called the Viking. This tandem inline trike will be loosely based on our Warrior Trike, taking some of the frame geometry. I usually start with an idea on my mind and then just throw a bunch of scrap tubing around while I take notes to see what works and what doesn’t.

Computer CAD may be more high tech, but I prefer a more hands-on approach, using cranks, tubing, and a few test seats to see my creations come to life. Below, I am testing the length of the main booms and clearances between the stoker’s cranks and the back of the captain’s seat. 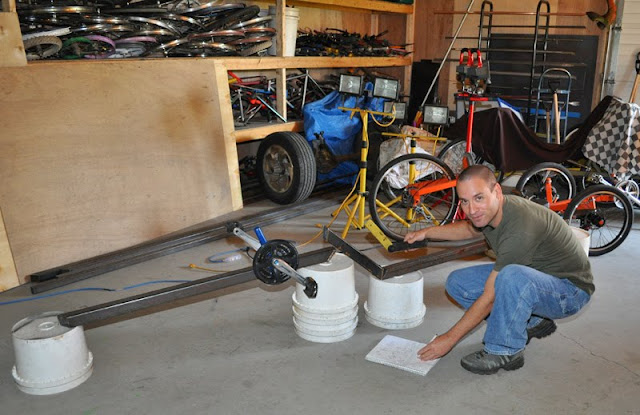 The Viking Tandem Trike will have a very unique frame and several features that no other tandem tadpole trike has (that I know of). When I looked over dozens of amazing production trikes, I thought, “What could be done better?”

The first thing I wanted to improve was the way the captain and stoker have their cranks linked together, forcing them to fight each other if not in perfect harmony. If you have ever been on a standard tandem, then you know what happens when one rider needs a break from pedaling or loses their footing - a jerking of the other rider’s cranks. On a low recumbent, this can actually be a dangerous situation, causing a rider to have a foot fall to the ground and possibly end up under the frame.

I made the decision that the captain should always be in charge, and have the ability to stop pedaling at any time without having the stoker force the cranks back into motion. To solve this complex problem, an interesting crossover drive system was built and tested that uses only standard cycle parts, yet allows independent pedaling. This new drive system also puts 36 speeds at the captain’s control and solves yet another weakness in the standard tandem driveline – the rear chain.

On a standard tandem, the thin speed-bike chain must deliver the force of two riders to the rear wheel, but on the Viking, a BMX chain and freewheel is used at the rear, which puts a heavier chain where it is needed. This will greatly extend the life of the transmission. 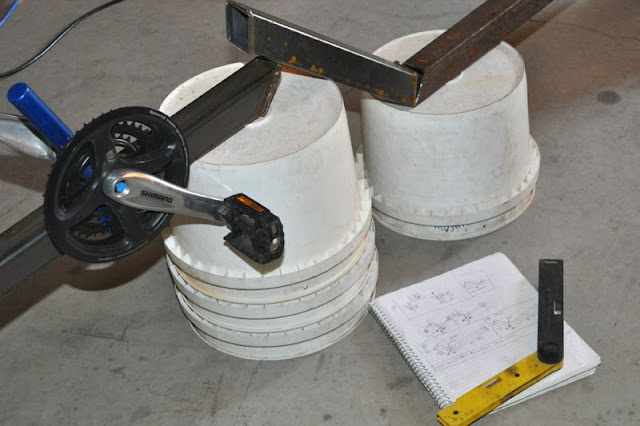 Once the initial setting up of seats and cranks was done, ground clearances, seat angles, and overall frame dimensions were decided on and committed to the sketches. From these sketches, I then started to cut the actual tubing, where I then take angle measurements. The goal is always to make angles as simple as possible and on this build, this went perfectly.

Most angles on the Viking frame are either 90 degree cuts or 45 degree cuts, and those that are not are found by setting up tubing, so anyone can easily build the tandem trike. I am using 1/16 wall 2 inch square tubing, so the frame is going to be very lightweight as well, and I am actually hoping that the finished product will be lighter than an $8,000 production tandem trike. Because of the unique frame design, this could be possible.

On a “standard” tandem tadpole trike, a heavy main boom usually runs the length of the trike and then a lot of extra tubing is placed over top to allow a place for the two seats, stokes cranks, and the rear of the frame. This design requires a lot of tubing and also allows the main boom to flex in the center because the trussing is not complete.

The Viking will also use a large 2 inch main boom, but it will become the seat frame, crank support, and rear of the frame without needing any extra tubing! In addition to a small truss tube that will make the frame very strong, the entire length is just one piece. Not only does this look very slick (on paper), but it makes for a lighter and stiffer frame that will be capable of carrying more weight than a standard parallel boom design. 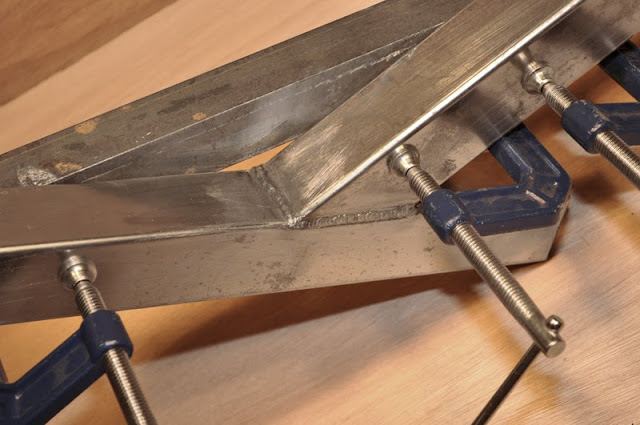 I don’t want to spoil the final unveiling of the Viking Tandem Trike, so here is just a small sneak preview of the rear of the frame, showing how the main boom comes from the back of the stoker’s seat right into the rear wheel, just like the Warrior frame.  The rest of the frame is very unique, and is lightweight, strong, and easy to build. The Viking also includes dual front disc brakes, dual adjustable bottom brackets to accommodate riders of various leg lengths, under seat steering, and puts all of the controls under the captain’s control without requiring any custom length cables. Having all winter to come up with new innovations paid off, and I hope the final design looks as good in real life as is does in the many sketches I made! More to come very soon… 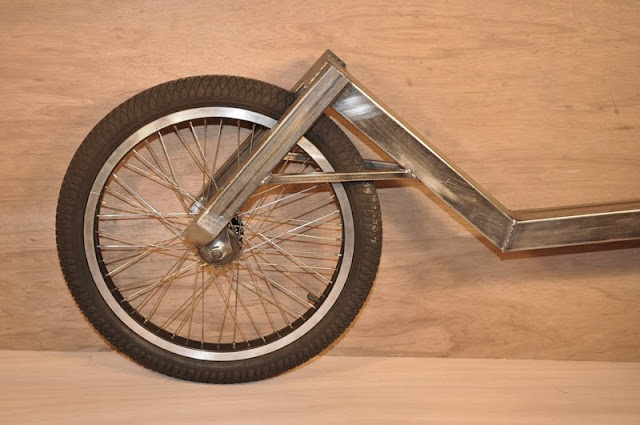 Posted by AtomicZombie at 2:33 PM