Here are some build progress shots on my Kyoto Cruiser, and one of the donor bikes after Mr. Angle Grinder's been to town. Pictured below is the chassis being put together. Who said you can't use a pillar drill to drill the chassis for the pillow block mounting holes? 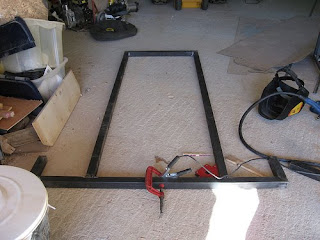 I had the flanges for the rear wheels turned for me at a local machine shop. Not exactly ecstatic with the speed so I took home a half-finished job. The flanges were too thick still at the spoke hole diameter, a little out of true and also the inside diameter of the axle mounting hole was too large giving a pretty sloppy fit on the 'precision' 20.0mm axle rod. Apart from that, it was great work. 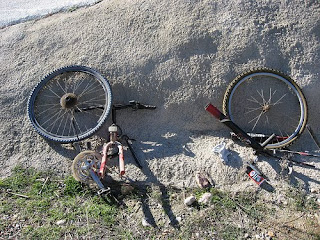 I did have enough donor bikes in the end, but the headsets were shot on all of them. So, I made my own 'swivel post' for the governor from a bit of steel bike frame tube for the outer, a couple of ball bearings (around a (euro) dollar each), some bearing mounts turned from aluminum alloy bar and push-fitted into the outer tube, a length of 12mm threaded rod (hopefully stiff enough) for the core post that was welded to a thick plate to be welded onto the chassis. I also made a nice cap for the top and a bit of tube to act as a spacer between the bearings. A picture says a thousand words. 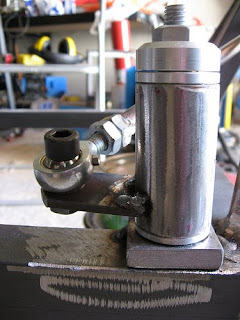 I used 10mm rod end bearings that I bought from eBay for about $5 each (better than the $30 that the local supply shop wanted). I had to make a spacer from a 10mm washer (and turn down the O/D of the washer to allow the movement without coming up against the same problem that I would have had without the washer). 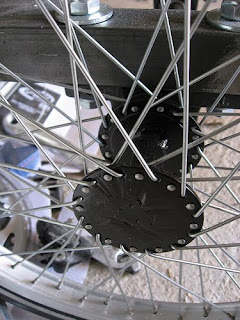 More progress, with one of the wheels nicely laced and trued by Debs. Hoping these don't foul the chain. I just liked the idea of the possibility of putting different seats on later without welding.

I didn't like the idea of having moving parts effectively welded in place, so this is an assembly rather like my conductor that comprises a pair of thin section deep groove ball bearings and some turned parts to make concentric tubes. The bottom part with the steering arm is a plug into the inner tube held in place with a grub screw. So, the whole lot is removable.


Rolling chassis day today! With brake (singular) and collars holding the back axles on. Putting the brake caliper on. Rear chassis tube seems a little bendy with me and passenger located? 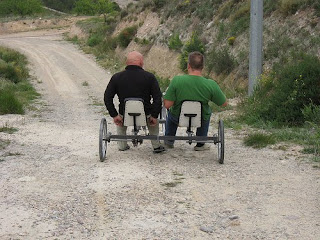 Downhill test Shortly after the photo was taken I lost my bottle. I could feel that one brand new (with probably slightly oily disk) brake wasn't going to stop us. Rear derailleurs, ugh! Mounting them is a pain. Only a couple of weeks ago - really far down the road in the project - I actually thought about how to mount the rear derailleurs. In the Kyoto Cruiser plans, Brad used a couple of 'old school' rear derailleurs that mount on the rear axle. These have their downside in that the ideal mounting point is in the middle of the axle (which is definitely not desirable for KC). But their plus side is that all you need is an axle-diameter bolt to attach to the spur that you weld to the frame.

I have newfangled Shimano rear derailleurs ('cheapo' Alivio series). They do have some alloy castings (I think) and some steel bits. These have the advantage in that they are designed to screw into dedicated holes in the rear dropouts in a normal bike frame. The minus side is that these are a weird thread (weird thread on a bike frame, never!). It's a fine 10mm. I mean really fine. Standard coarse 10mm (M10) is 1.5mm pitch. Standard fine 10mm is 1.25mm pitch. These are 10mm x 1mm pitch.

My first thought was to machine a pair of new mounting bolts for the derailleur and throw away the ones on the Shimano. So, 'just' push that circlip off holding the bolt in place...hang on...just get the screwdriver...hmm, that's a bit tight...push...push...PING!!! @#&%!

So, there's a big spring hidden inside that body of the rear derailleur to control the chain tension and allow for a wide movement over sprocket diameters, isn't there?!? Firstly, where's that circlip gone? No idea - I have 120m2 of garage and a very large amount of junk in there. I have no spare derailleurs and no spare circlips. @#&%!

OK, we are short on time (I want to finish by the end of April—all will become clearer later) and I need some plan B's in case I can't find that circlip. Onto eBay and ordered a second hand 10mm x 1mm pitch tap - that gives me the option of making my own dropout-style mount. Also, ordered another Alivio rear derailleur (I plan to make more bikes in the future, so it won't hurt) from another eBay-er.

One day later, my wife found the circlip! Yay! Now, just push it together and we're back on track when the 10mm x 1mm tap arrives. Has anybody ever actually tried to put one of these back together?!? It seems as though you need three pairs of small, yet very strong hands. 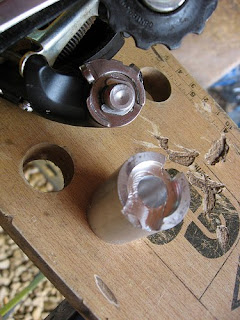 Put my production engineering head on, after all, they must be able to make these in the Shimano factory. So, I thought of making a little a jig that holds the little plate thingy and hold the jig in the bench vice.

Today I finished it (with some tortuous milling in my little mini-lathe (tip for those thinking of setting up to do milling in a mini-lathe: don't, just buy a mill)). And, it worked! Here's the re-assembled derailleur (showing that pesky 10mm x 1mm screw held in by that even peskier circlip and hiding that very naughty, big tension spring inside).

In the meantime, still waiting for the 10mm x 1mm tap to arrive by post from UK. I thought, hey, why not just cut off a bit of frame which is tapped correctly and weld it on to the spur from the frame? So, that's what I did (and the tap still hasn't come from the UK eBay-er (nor the spare derailleur). 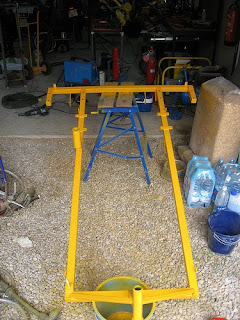 As you can see by the picture, the bike will be yellow. Very yellow (with some black ancillaries). The second colour coat is on, and I have a pile of bits which I'm eager to bolt onto the frame.

Here's an accessory which is work-in-progress that will be bolted on to some of those extra tabs on the frame. 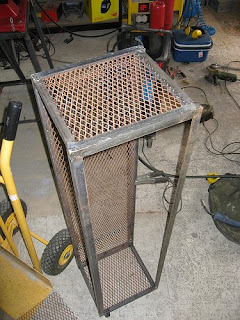 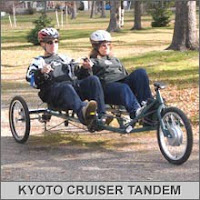 Posted by AtomicZombie at 5:41 PM