*** Featured on Makezine.com and Instructables.com *** 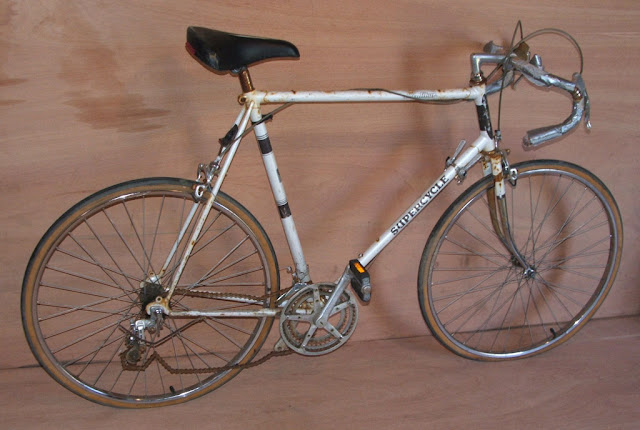 This old style 12-speed bike was chopped up and re-assembled into a lowrider chopper.
Chopper bicycles seem to fall into two distinct species - the traditional long-forked species and the lowrider species. The lowrider style chopper usually involves dropping the key components of a standard bicycle frame as low to the ground as possible and pressing the front wheel way ahead of the head tube in order to compensate. These bikes make great show bikes, especially when riddled with copious quantities of chrome and custom components, but overall ridability is not as good as with traditional long fork choppers. The front wheel placement and fork design make the bike steer more like a front end loader than a bicycle, and only a true "choppacabra" can make riding these beast look easy.

Do a search for "lowrider bicycle" in your favorite search engine and have a drool over all of the show bikes - note the strange front fork arrangement I was talking about. For this project "Tour de Hell", my goal was to not only create an evil beast of a lowrider, but to poke a little fun at the spandex clad skinny wheeled race bike pilots at the same time. Race bike enthusiasts take the science of their sport to new levels, designing frames using space age components, and shaving every ounce off the bicycle. They love the design of the venerable "double diamond" frame, and will defend it to the death, one of the reasons why recumbent frames were banned from Olympic racing after blowing away all the other cycles, according to my extensive research on bikes and bike racing over the years.

Anyhow, the chopper I was about to build would take a speed bike and turn it into the exact opposite of what a true racing cyclist would desire - a dangerous chopped and lowered speed bike with handling characteristics similar to that of an angry blind mule on steroids. Yes, a lightweight low riding speed bike, with erratic handling, yet still capable of serious speed!

The idea for Tour de Hell came to me when I was digging through the scrap pile at the local dump. With so many old speed bikes in the pile, it was too bad that I had no use for them. Because of the lugged frame construction, and easily warped rims, I usually had no use for the bike, or any of its components. I remember one day out riding with the chopper gang, and being snubbed by a few spandex boys on their $2,000 wedgie racers. Wouldn't it be a trip to hit the bike path on a chopped speed bike. Imagine the horror on their faces if I rode past them on a "chopper speed bike"! So here you have it - an old 12-speed race bike found at the local scrap pile (Photo 1). The bike was in horrific condition, but that was not a problem, as it would soon be ripped apart and built back into something evil.

Most of the damage was due to seized cables, shifters and brakes, but that was not a problem, as my design was going to be fixed gear anyhow - set for all out speed. The components are laid out and checked over (Photo 2). Chopping shall now commence. 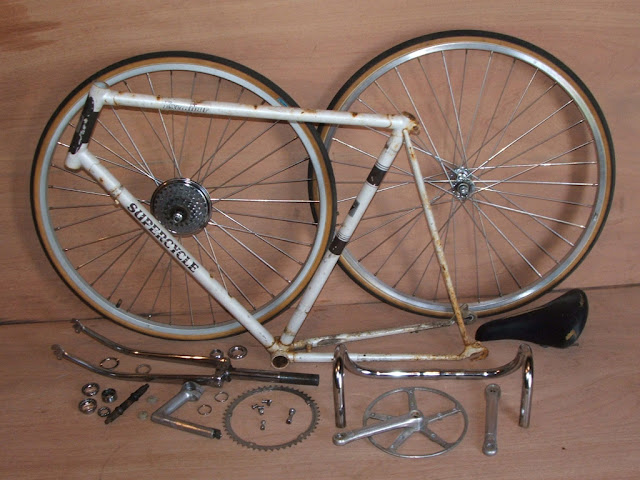 Photo 2 - Speed bike torn to bits.
To create the lowrider style front end, two pairs of forks of the same general size and length would be needed. Luckily, I had a bucket full of speed bike forks in the garage, and an identical set of chrome forks was found (Photo 3).

Photo 4 - Cut the fork stem at its base.
The stem is then welded back the forks, but on the side (90 degrees) as shown in Photo 5. This takes a hundred years of bicycle science, and throws it right out the window - things are looking good! With forks of this design, a bicycle's steering geometry is radically altered, and it actually pivots rather than steering like a normal bicycle. 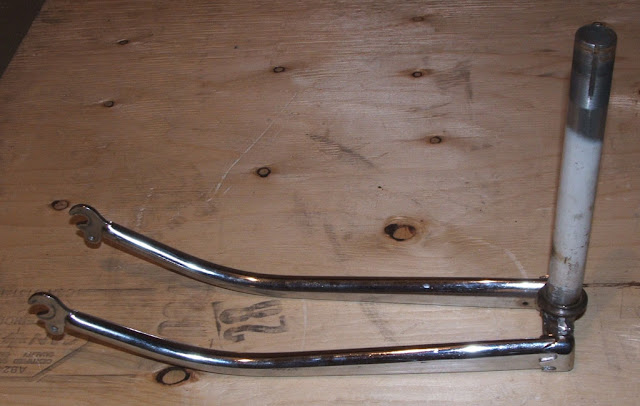 Photo 5 - Four identical 90 degree elbows.
With the fork stem welded at 90 degrees to its original position, the bike frame is dropped to ridiculously low levels (Photo 6). Do not try to sit on the frame, or put weight on it yet, the forks are not nearly strong enough to take any abuse at this stage in the build.

Photo 6 - Now that's a low frame!
The second set of forks will form a triangle with the bottom set of forks, similar to the rear triangle of a bicycle frame. In Photo 7, I am getting the basic angle of the top set of forks in order to cut them for welding to the steel gooseneck as will be shown in the next few steps. Draw a line from the top of the fork stem closest to the wheel upwards across the top fork stem to be cut. They are currently bolted to the front wheel, overlapping the original set of forks on the wheel's axle. Photo 7 - The top half of the new forks.
Once the fork stem is cut to the proper angle, it can be welded to the steel gooseneck as shown in Photo 8. To make this job easier, the gooseneck can be placed into the fork stem, and the forks bolted back to the wheel as they were in the last photo and then tack welded in place. The resulting unit will look like it does in Photo 8, with the gooseneck clamp turned around backwards from its original position. 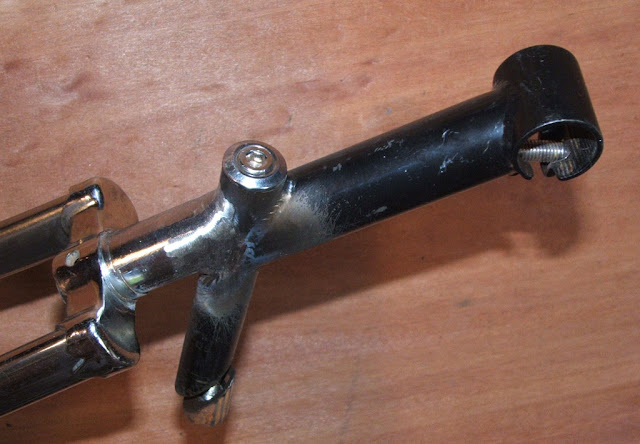 Photo 8 - Welding the forks to the gooseneck.
The completed lowrider forks are installed onto the bike (Photo 9) by inserting the gooseneck, and bolting both front fork dropouts onto the front wheel axel. One of the forks will have to have its legs opened slightly wider than normal so both pairs can share the axel, but this is easily done by pulling them apart by hand. You could weld the two fork legs together, but then the forks would never come off of the bike, not that this would really be a problem after painting the bike. 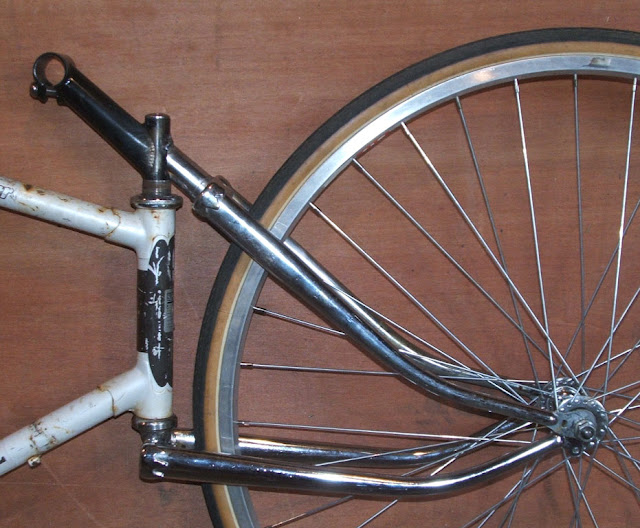 Photo 9 - The completed lowrider forks.
To keep as much of the original bicycle as possible, and continue doing every thing a serious speed cyclist would hate the most, I used the original curly handlebars and turned them upwards (Photo 10). Because of the ridiculous low position of the head tube, it would be very hard to reach them if they were any lower than this. 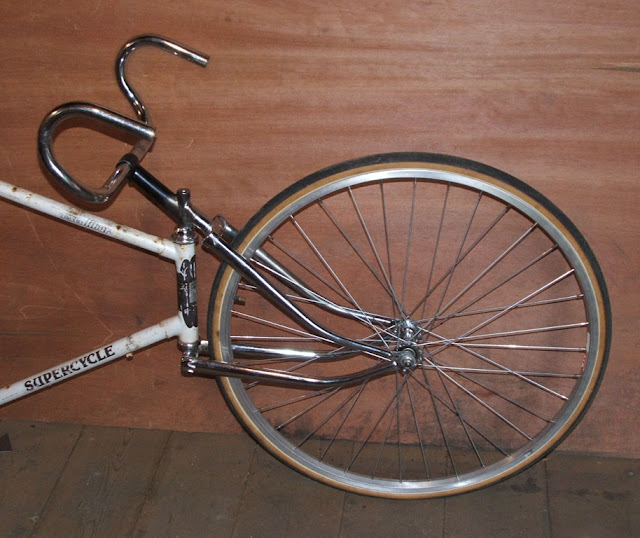 Photo 10 - Handlebars installed.
There is no way the original bottom bracket could be used with the frame this low. In fact, it's so low that the chain ring would even hit the ground. Another bottom bracket is carved from some old frame and placed in the vice for cleanup (Photo 11). 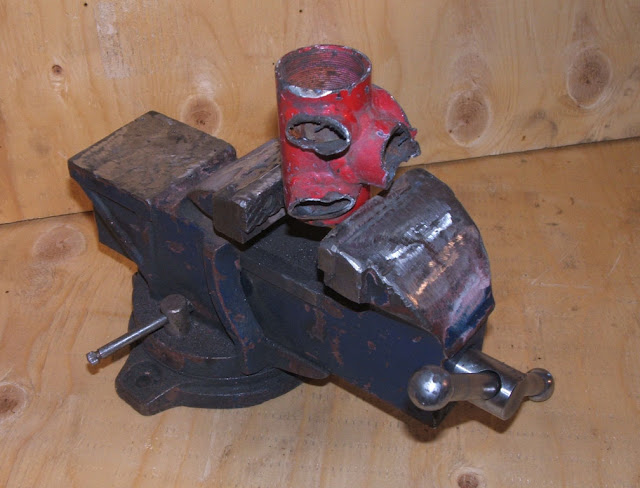 Photo 11 - Salvaging a bottom bracket.
The cleaned up bottom bracket will be installed somewhere on the frame that allows the cranks to spin without bottoming out. To do this, a notch is cut from the down tube ahead of the original bottom bracket, and the new one is inserted there (Photo 12). Don't forget about the threads - there are a left side and right side to these things! 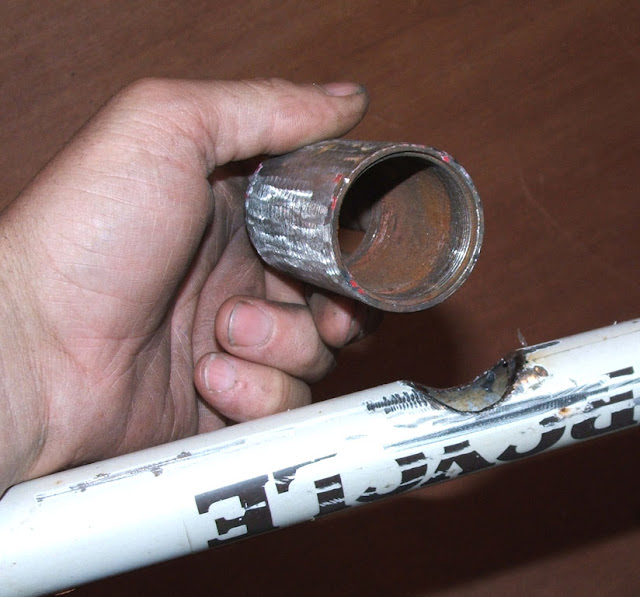 With the new bottom bracket installed further up the frame, there was plenty of clearance for the cranks (Photo 13). Now this poor innocent speed bike is only a few steps from becoming a fully chopped lowracing recumbent death trap. 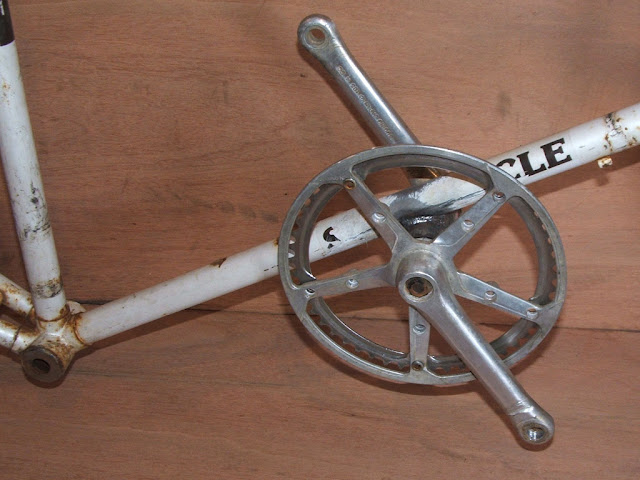 Photo 13 - The relocated bottom bracket.
Can you imagine the handling characteristics of the evil beast taking shape in Photo 14? I love a challenge, and I knew this bike would feel like nothing I have ever ridden before. I was eager to get out and skin a few elbows. 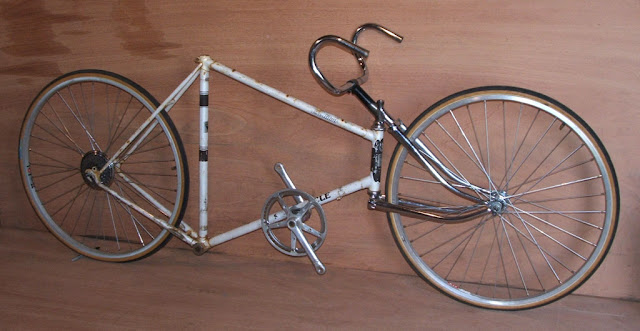 Photo 14 - The twisted beast taking shape.
As if the bike wasn't as twisted and evil enough, I just couldn't put the seat back on in its normal position. To make the overall attitude of the bike even more unwelcoming, the seat post was welded to the little tube between the seat stays, and placed as close to the rear tire as possible (Photo 15). Now the rider would be low, sprawled out, and in control of a bike that may actually have a mind of its own - great fun! 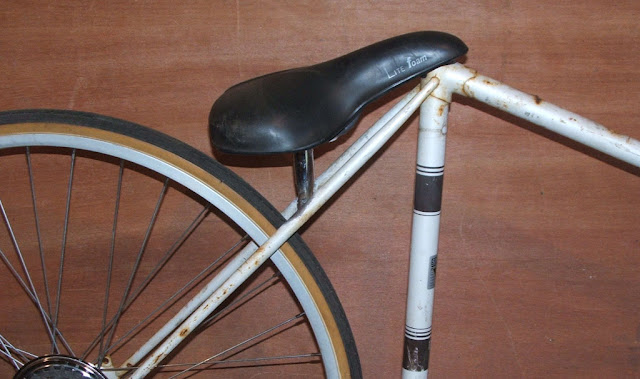 Photo 15 - The seat is almost on the rear tire.
To make the bike functional, a chain was cut to the correct length and placed on one of the higher gears for all out speed (Photo 16). I promptly jumped on the chop, and headed down the street, fully expecting to get my ass kicked. Well, wasn't I surprised, when I could ride the thing! Although I did flop around like a flounder out of water for a little while, once used to the weird pivot steering, I could ride the bike smoothly. I went faster and faster until I came to a corner, and there it almost ended badly. I only have one word to describe what can happen on this kind of chopper at high speed - jackknife! 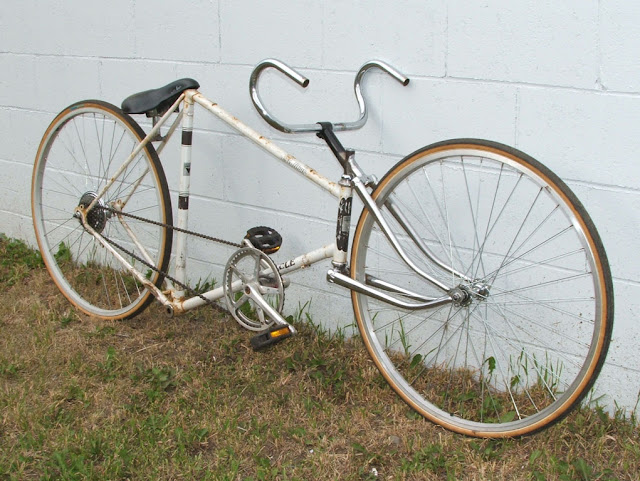 Photo 16 - The completed, unpainted bike.
Since the bike was rideable, and it was extremely fun to watch my buddies drive into walls on their first attempt at riding it, I decided to fix it up with a nice paint job. The name Tour de Hell suited the bike perfectly, because once you get on the thing, you are most likely going down fast! To keep the evil magic flowing, another chrome tipped fork set was cut just for the tips (Photo 17). The top part of the fork legs and dropouts were cut off leaving the rounded points, then the oblong tube at the other end was un-squished in the vice to make it round again. 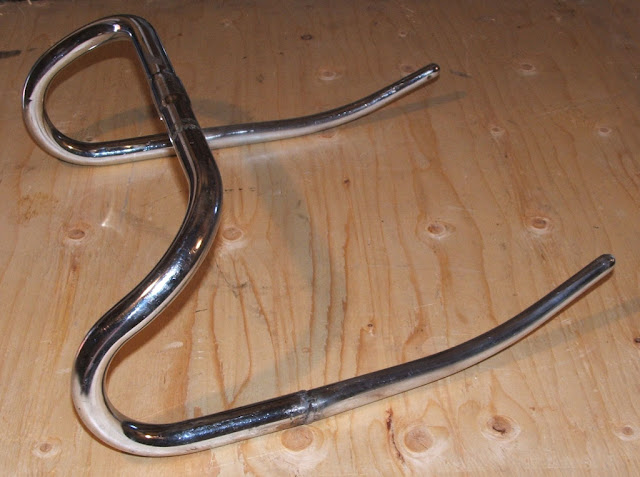 Photo 18 - Devil horns!
Once painted and re-assembled the chopper looked pretty damn cool (Photo 19). There was something about the bike that taunted you to ride it, yet at the same time warning you of the impending pain that was in your immediate future. Ok, it wasn't all that bad, I mastered the bike in a few minutes, and although most who tried it hit the nearest wall, after a few tries, anyone could ride the thing. 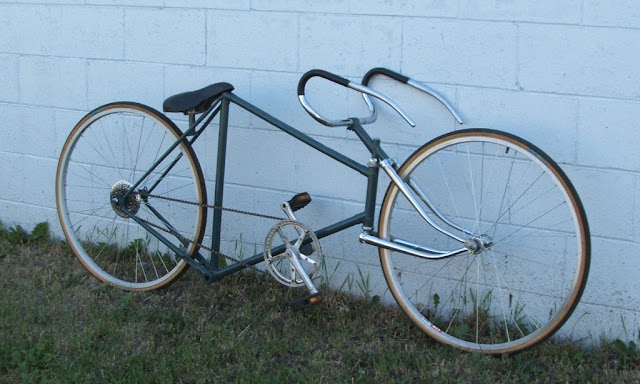 Photo 19 - Tour de Hell - a serious cyclist's worst nightmare!
Cam strikes a pose with Tour de Hell, just before crashing it into the fence (Photo 20). I rolled on the ground laughing as he wobbled down the lane looking like a spastic fish, flopping left and right to control the bike. The tendency to over balance the bike was amplified due to the pivoting front steering. If you just relax a little, and trust the bike, it will let you ride it in a straight line. Cam eventually had the bike under a bit more control after a few spills. 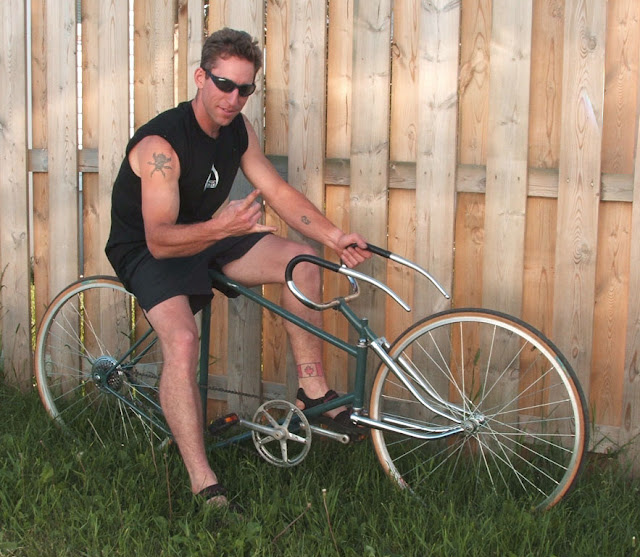 Photo 20 - Cam the fearless posing with Tour de Hell.
This was a fun project, more of a show chopper than one that I would want to travel great distances on, but definitely fun to ride. The best part, I have to admit, was demonstrating how easy the bike was to ride to friends and then watching the carnage ensue when they gave it a shot. The "spastic fish dance" is something that has to be seen in person to fully appreciate. Most riders would get the hang of the bike after a few minutes, as Cam eventually did (Photo 21). Do you think you can ride an evil beast like Tour de Hell? 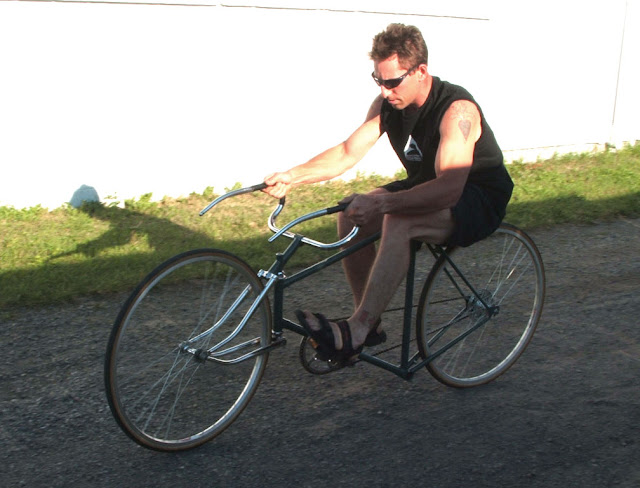 Posted by AtomicZombie at 4:28 PM