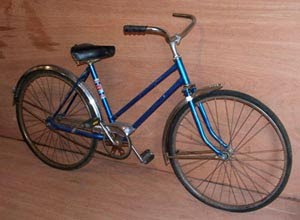 You know what really irritates the heck out of me? I drive all the way out to the dump, pay my five bucks to get in, and the only bikes laying around are those goofy granny bikes from the late 1970's. Dog, what's the deal? I need some new parts!

OK, enough whining, it's payback time. A real chopper artist can chop any bike, even this crusty old codger cruiser. In fact, the more I looked at the bike, the more I thought it would be a sweet ride. Check out all that chrome, look at that long spindly frame, yeah, I could make this happen.

Normally, I do not even bother with these frames because of their "lugged" construction. Lugged frames are not really welded at the head tube and bottom bracket, they are press fit and brazed. Because of this, you cannot really salvage the head tube or the bottom bracket, and this makes the frame useless for parts normally. Even the rims are those goofy 27- inch size, too big for a mountain bike tire. Because I was planning to hack this granny cruiser into something evil, I would be keeping most of the frame in one piece, so the project was still doable.

"Turn down that devil music, you crazy kids!" I could hear the bike talking to me. I thought I'd better rip it all apart before I start wearing a helmet and worrying about brakes! Photo 1 shows the old fashioned bike before hacking. These styles were easy to find at the dump or at yard sales.

Photo 1 - Chop this bike? Was I losing my marbles?
Here is the donor bike, taken apart for chopping (Photo 2). Even though this bike is older than time itself, it came apart very easily, and the chrome parts have only slight surface rust - easy to clean with steel wool. I will be using all of the original bike, as the theme for this chop will be Granny's Nightmare! 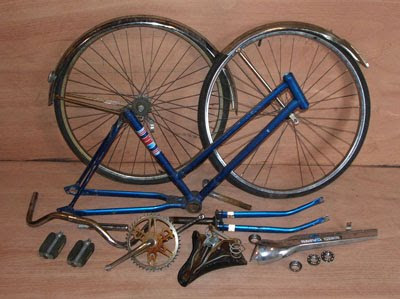 Photo 2 - Reduced back to a pile of parts.
This chopper will have long forks and a slightly modified frame when completed. I did not want to change the bike so much that it loses all of its original look - the idea is to make it radical yet show its roots. Photo 3 shows the original forks with both legs amputated right at the crown. It should be easy to build a triple tree from these forks as they are made from heavy mild steel. Back in those days, they knew how to build a bike, not like these young "whipper-snappers" today, sonny. 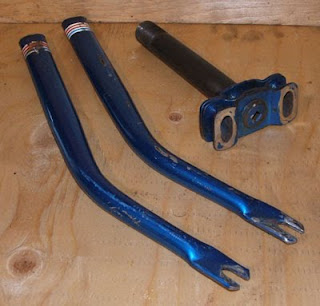 Photo 3 - Fork legs amputated
I used the original fork dropouts, so they were cut leaving enough neat to weld to the new fork legs (Photo 4).  Save the original fork legs, though. With those nice curves, it should be easy to integrate them back into the frame for a unique and classy look. Both dropouts should be cut as close to the same length as possible in order to insure wheel alignment. 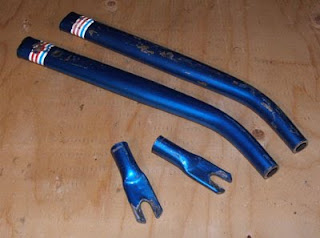 Photo 4 - Cut the ends of the forks, but save the legs
Since the long forks are the focus of the bike, and the frame adjustments will be based upon them, they are made first. I started with a pair of 4 foot long 1 inch thin walled conduit lengths as shown in Photo 5. Four feet is plenty long, and if I made them much longer, radical frame manipulation would be necessary in order to prevent the "instant wheelie" effect.

Photo 5 - A pair of 4-foot long conduit tubes.
The original fork crown is used as the base of the triple tree. The new fork leg extension tubing will be welded directly to the ends of the crown, so it should be ground slightly to allow for easy welding (Photo 6). Do not take too much metal out, just enough to make a good weld that will cover 1/3 or more of the new tubing's diameter. If you ground too much out, the fork legs would be too narrow for a front wheel, and major warping would occur to the conduit while welding. 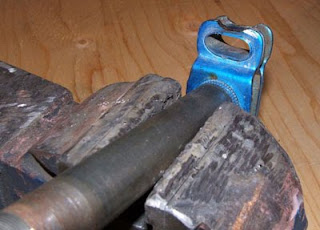 Photo 6 - Grind the edges of the fork crown.
Once both fork crowns are ground out, and both fork leg extension tubes are exactly the same length, lay the unit on a flat surface and tack weld both fork legs into place as shown in Photo 7. Use only one solid tack weld per leg, as you want to be able to align the tubes as the front dropouts are positioned in the next few steps. 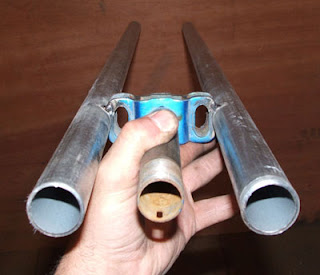 Photo 7 - New fork legs tack welded in place.
To get the dropouts aligned in the proper place at the ends of the new fork legs, first bolt them to a front wheel as shown in Photo 8. They should be secured tightly and both at the same horizontal angle. Also, make sure that flattened end that holds the axel is not bent, if it is pull it straight with a pair of pliers. The distance between the dropouts is usually 5.5 inches for a front wheel. These old bikes may be even less. 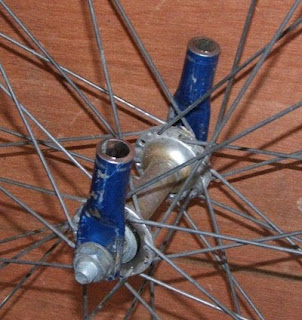 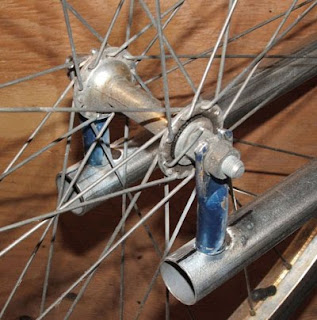 Photo 9 - Welding the dropouts to the fork legs.
Once the forks are solidly welded, place them into the frame to have a look at what you have so far. Most likely, the bike will seem to lean back too far, and the bottom bracket will be very high (Photo 10). Because of the extreme fork length, the frame has been pulled backwards creating the "skyscraper" style chopper. Although the bike would be readable in this configuration, and it may indeed suite your style, I decided to lower the bottom bracket a few inches by making a small mod to the frame. Since I planned to remove the top tube and convert the frame from a girl's frame, this wasn't a big deal. 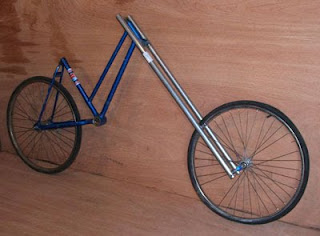 Photo 10 - The bottom bracket is a little too high.
The top tube is cut from the frame right at the thick part of the lugs on both the head tube and seat tube as shown in Photo 11. The frame is no longer a girl's frame, in fact it is no longer a frame at all, as it would not even hold up to a child's weight like this. I did not cut flush with the tubing due to the lugged frame construction, as this would make a huge mess. I planned to use the thicker part of the lugs to my advantage, as you will soon see below. 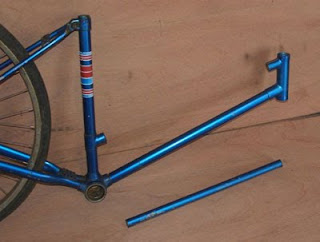 Photo 11 - Removing the top tube.
A rather lazy way to change the angle of a welded tube is to slice a thin pie shaped wedge out of one side, then bend the tube towards that side to fill the gap. As shown in Photo 12, I hack sawed a  pie shaped cut into the base of the down tube so it could be bent upwards, reducing the height of the bike. Mild steel is very forgiving, and the bending process will not weaken the metal, and after the gap is filled with weld metal, it will actually be stronger than when I started. 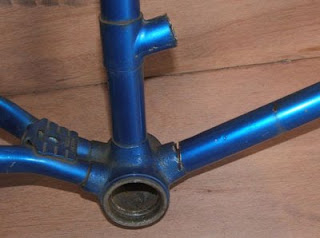 Photo 12 - Take a bite out of your bike.
Once the down tube was bent upwards to close the gap (easy wasn't it?), the area was welded solid as shown in Photo 13. If you made your wedge shaped cut even on both sides of the tube, then the tube will be moved in perfect alignment with the rest of the frame. 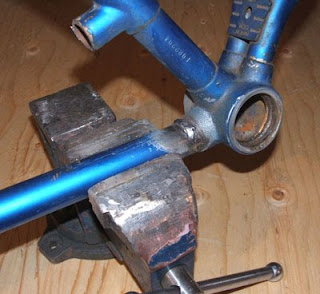 Photo 13 - Filling the gap on the re-adjusted down tube.
I thought it would be cool to use only the original bicycle tubing to make this chopper, and since I had a pair of fork legs from the original bike, I decided to use them to make a nice curved top tube. The fork tubing is actually round tubing that has been squished into an oblong shape. To merge it into the frame, I "un-squished" it in the vice (Photo 14), welded the forks together so I would have a piece long enough to become the new top tube, and a  bit left over to fill in the ugly gap on the lower lug. 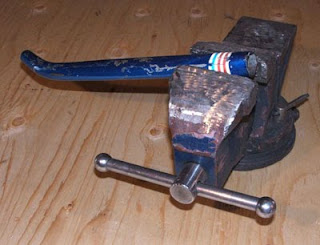