Making Trike Hubs Without a Lathe

First of all, I would like to thank all of those who visit our forum and help others with advice and offer their great tips and tricks. There have been two alternative ideas posted in regards to creating the hub flanges that I use on trikes and quads such as the DeltaWolf, Kyoto Cruiser, Street Fighter, Gladiator, and Lode Runner. One alternative to the machined disc is to cut the required flatbar or plate using the appropriate sized hole saw. The other alternative is to source out precision made washers of the appropriate size. Often these washers are called "fender washers", "dock washers", or "aircraft washers".

I would like to present another alternative to the machined discs that only requires the use of an angle grinder, and hand drill. This procedure takes about 2 hours for all four discs, and is very effective if you don't mind spending a little quality time with your angle grinder. Since the hub flanges required in the plans vary in size, I will not be posting measurements here, but the same procedure will work on all trikes that use the hub-axle system I have developed.

Figure 1 - Marking the flatbar for the disc cutouts

The flatbar needs to be at least as wide as the discs you plan to make, and the required thickness. This flatbar is very easy to acquire, and can often be found in the welding isle in many hardware stores. You will need enough material for 4 discs, which is the number of discs needed for a delta trike or quad. In Figure 1, I have traced two of the discs using a paper template that was made in Photoshop and then cut out. The traced circles are the same diameter of the flanges on the hub in Figure 1 because I am using the rim and spokes from a complete wheel that had this hub. The center of the disc must be marked and punched before any cutting, as you do not want to loose this center position. The punched center will later be drilled for the axles. Also, use a marker that can hold up to a little abuse as you will be grinding and handling the discs with gloves.

Figure 2 -Rough cutting the discs with an angle grinder

Figure 2 shown the discs being cut from the flatbar using a few straight cuts around the circumference with a zip disc. 8 or more cuts are made just outside the marker line so that final grinding does not take much time.

After a few minutes of cutting with the zip disc, the part is liberated from the flatbar as shown in Figure 3. Notice how none of the cuts are inside the marked line.

Figure 4 - Using my "lathe" to make the discs round

My "poor man's lathe" is of course, my angle grinder! If you take your time and work around the discs, it does not take long at all to get them almost perfectly round. I think the angle grinder is like an artist's paint brush - learn to master it, and it can do a lot more than you might think. Since the discs get quite hot while doing this part, I work around half the disc, then switch it for another one until they are all rounded.

Figure 5 - Comparing the round disc

The disc on the right of Figure 5 has been rounded, and is so close to round that it looks like it was machined. Hey, if a person can carve out a beautiful sculpture from a block of wood using a chainsaw, a skilled garage hacker should be able to make precision parts using an angle grinder!


More of this free tutorial: http://www.atomiczombie.com 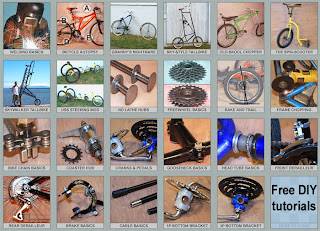 Posted by AtomicZombie at 10:06 AM